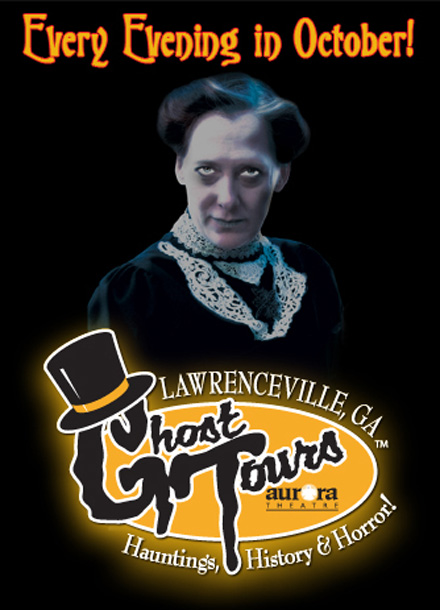 Sharing spooky stories of historical haunts and paranormal activity, costumed storytellers guide the living (and along with a few undead) through a 90-minute stroll around the picturesque downtown square. By way of Honest Alley, the haunted jail and other devilish destinations, metro-Atlanta’s most popular ghost tour unveils the mysterious myths and legends during a witching hour moonlit walk.

“The ghost tour is meant to be a fun family-friendly outing, as it’s free of grotesque and startling effects,” said Anthony Rodriguez, Aurora Theatre Producing Artistic Director. “We’re proud to have so much rich history in Lawrenceville that allows us to invite families to explore the town like they’ve never done before; these vibrant stories mixed with the vivacious personalities of the storytellers end up creating a spooky treat for residents and visitors!”

Hailed for its eerie encounters with EVP (electronic voice phenomena) and floating orbs, the Haunted Cemetery Tour is for brave souls seeking an extra frightful delight, October 9-31! Not for the faint of heart, thrill seekers follow Madame Macabre (Cynthia Rintye) through tombstone paths as she recounts her own chilling tale that inspired this tour! Guests should wear closed-toe shoes, bring a flashlight and be at least 13-years-old to participate; a signed release form will be required for every attendee.

A frightful delight for the entire family (well, except the little tykes who scare easily!), Lawrenceville Ghost Tours is presented every day in October with the Haunted Cemetery Tour bringing screams of fun October 9-31. Ticket reservations can be made by calling the Box Office at 678-226-6222 or online at tickets.auroratheatre.com. Tickets for Sunday through Thursday ghost tours are $12 (adults) and $9 (children); Friday and Saturday ghost tour tickets are $15 (adults) and $12 (children). Tickets for the cemetery tours are $20. For more information, visit scarystroll.com or email info@scarystroll.com.

Regular ghost tours are as follows:

*Tours are also offered year-round, May through September

Haunted cemetery tours are as follows: