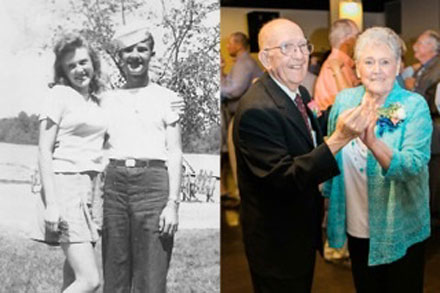 On October 7, 2016, Bill and Elizabeth “Lib” Deese of Snellville will be celebrating their seventieth wedding anniversary.

Originally from middle Georgia, Deese spotted his future bride one day when she walked through the doors of the local super market in Warner Robins. A senior in high school, Deese was employed as a butcher behind the meat counter. He turned to his friends and said, “I think I’m going to marry that girl someday.”

To which they replied, “Well, you’ll need to get to know her.”

“Oh, I will!” Mr. Deese responded without skipping a beat.

And he did. Deese recalled, “Lib was hired to be a cashier at the store. I would flirt with her and we would even exchange kisses through the screen door located in the back of the store. Eventually, I asked her out on a date. Then one day I stepped away from the meat counter while Lib was stocking baby food on the grocery shelves. I asked her to marry me on bended knee.” Deese laughed, “It was very romantic!”

After graduating from high school in 1946, Deese joined the Navy. Numerous letters were exchanged between them while he was in boot camp and when he was later stationed in Pensacola, Florida. Working as a yeoman for one of his captains, Deese told his supervisor that he would like to leave for the weekend to get married. Permission was granted. Upon his return to the Navy base, he told his captain that he and his fiancée got cold feet. Deese said, “I left the base on three separate occasions, all with intentions of getting married. Each time, we chickened out. The final time I asked my captain for permission to leave to get married, he said, ‘If you don’t get married this time, I’m going to put you in the brig!’ So, Lib and I ran off to Perry, Georgia and got married at the courthouse for ten dollars.”

“People said we wouldn’t last. After I was honorably discharged from the Navy in 1948, I took a job with Sears and Roebuck as a customer service clerk.  I remained with them for the next forty years. I worked hard and was promoted throughout my career. We were transferred to various locations before settling in Stone Mountain in 1968.  Lib was a homemaker, but served as a church librarian after our move to Atlanta.  She also taught kindergarten for 4-year olds at Clarkston Baptist Church for many years.  After her retirement she enjoyed spending time with her grandchildren and sharing her love of learning with them.  Both of us were very active serving in our church wherever we lived. I retired in 1988 while working in Marietta.  I’ve loved baseball since I was a young boy and enjoyed coaching church softball through the years.  Once I retired I had the treat of coaching my grandson in T-ball.”

What is the key to a successful marriage? “We are believers and trust the Lord. I believe God put us together. We made a commitment. We always loved each other and never doubted our love.” Deese cited respect, good communication, and listening skills as being very important. “I just say, ‘Yes ma’am’ and do what she says,” he chuckled.

“It’s been a wonderful life and it still is. Our daughter calls every day to check on us and at eighty-eight years old, we’re still in pretty good health.”

Daughter, Mary Beth Smith is thrilled for her parents. “I’m very thankful for them and their Godly example, their love for others, and for us.” Smith refers to her three brothers, Tommy (deceased), Michael, and Alan. “My parents were so sweet to us. They are giving people who love the Lord and each other. Most people are amazed when I tell them they are celebrating their seventieth wedding anniversary. Even through tough and good times, their marriage has endured the test of time. They made our home very secure and positive. My parents were always there for my brothers and me. It’s such a blessing for their eight grandchildren and six great-grandchildren to witness.”

What is the traditional seventieth wedding anniversary gift? Platinum. The modern alternative or symbol is iron.

The Deese’s plan to celebrate the momentous occasion with family. “Perhaps, I’ll even take Lib out to a local steakhouse,” said, Deese.