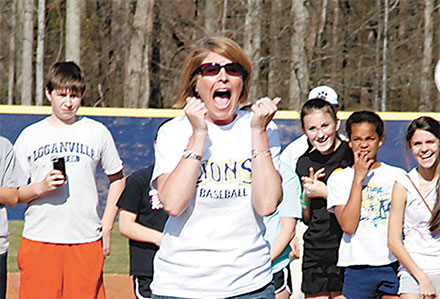 I have been bossed around by a lot of people in my life but no one as adorable as Cheyenne Anderson, preschool veteran of Bethlehem Christian Academy, who has been known to coach her mother in the morning by saying “Mom, that’s not your color.” Daughter of Casey and Ryan Anderson and sister to 9 year old Caleb, Cheyenne loves being photographed and in Cindy’s words “very fashionable.”  The well rounded Ms. Anderson, loves princesses, playing outdoors and tumbling.

We have worked with  Loganville Christian Academy Theater Teacher and Yearbook Advisor Cheryl Ingle for several years and she was not suspicious when photographer Meredith Chastain came to photograph her throwing out the first pitch when the LCA Lions faced baseball team Heritage Academy.  Son Harrison Tobin, an LCA Graduate, was away in the US Army or so she thought until she delivered her opening game pitch to a baseball team alumni in full catcher regalia. This turned out to be Harrison, who secretly took a weekend pass from the US Army to surprise her.   When he threw off the  catcher’s mask, the look on Cheryl’s face was priceless and left the stands in tears. Also in attendance was Harrison’s grandmother, Rick Tobin, and cousin, Brayden Tobin.

Father Daughter Night is a hard act to follow but the Lovin Elementary School “Outer Space” Mother/Son Night  allowed for a great variety of matching alien garb.  Photographer Meredith Chastain was impressed by the matching Bow tie tee shirts and hats of 5th grader Jaylen Magby and Mom Katrina.  They enjoy one another’s company just “hanging out” or enjoying their favorite food “Fro Yo”.

Superlatives at Gwinnett School or Math, Science and Technology are taken lightly because it is largely a group who have many awards in their future.
Mr and Ms. GSMST, William Jin and Julia Han, were selected because of their many accomplishments.  While Julia is weighing her college options, William is headed for Harvard.

Its rarely been done but Meg McRee followed her fall Homecoming Queen crowning at Lanier High School with a double header by becoming Prom Queen.

She and King Ryan Edwards replicated for me some of the stunning moves they did during their Victory dance after being crowned.  Meg is headed to Vanderbilt University in the fall. Mom Nancy works at Lanier High School and we became book buddies as she initially worked in the Media Center.  Nancy continues to good naturedly recommend some of the cutting edge Young Adult Literature to me and when I want to spend a weekend crying I text her for the latest YA favorites.

Prom is not just for Prom kids as was proven by Brian and Amanda DeLong while attending the Grayson High School event at Fernbank Museum in Atlanta.

In 2004, Brian and Amanda, met and married while teaching on the same hall at GHS.  Amanda took a break from teaching Spanish to have twins Hannah and Rachel, now seven, as well as five year old Ruthie.  She is now teaching Spanish at Gwinnett School of Math, Science and Technology while Brian remains teaching a full range of Social Studies courses at GHS.  This glamorous pose not only reflects the Prom theme of Gatsby but also allows her to balance on her good ankle.  With three energetic and athletic daughters, Amanda will be seen around almost everywhere sporting her broken ankle space boot.