Gwinnett Roadrunner - On The Run June 2014

The Gwinnett Roadrunner -
On The Run June 2014
By Mary Frazier Long
THINKERS
* When you walk what you talk
people listen.
* If you can read and don’t you are an illiterate by choice.
* The trouble with most of us is that we would rather be ruined by praise than saved by criticism.
* In youth we learn in age we understand.
* You’ll never get ahead until you start advancing.
* Do not let what you cannot do interfere with what you can do.
* Life is a great big canvas and you should throw all the paint
on it you can.
* Big shots are little shots who keep shooting.

CELEBRATIONS
• Bela and Delores Kenessey celebrated their 50th wedding anniversary at an open house given by their family on June 8, 2014. Bela and Delores live in Lawrenceville.
• Griffeth relatives and friends gathered on May 18, 2014 for the annual Griffeth family reunion hosted by Edd Griffeth. The gathering was at the Bethlehem Methodist Church in Bethlehem, Georgia.

OPPORTUNITIES
• The Snellville Historical Society office hours are Monday and Friday from 10 am until 12 noon. Offices are in the Snellville City Hall. President of the Society is Tom Ewing.
• Lawrenceville High School Alumni and friends are invited to a Bring your own dish to the annual reunion at the Lawrenceville First Baptist Church Fellowship Hall on July 5. Begin gathering at 11 am.
• The Lawrenceville Kiwanis Club meets on Thursdays at noon at the Longhorn Restaurant on Lawrenceville/Suwanee Road.
• The Central Gwinnett Foundation Fall Event will be October 21, 2014 at Medieval Times.

Thanks to Lawrenceville Business owners who sponsored the 2014 Trolley Tours of the Historic area of the town during the month of May. The oldest trolley rider was Bob Connolly age 102 who rode with his daughter, CathyGilley.

CONGRATULATIONS
• Perry Roberts has been named Executive Director of Institutional Development at Gwinnett Technical College. For the past four years Roberts has been assistant vice president for development with the University of North Georgia.
• Hugh May, retired Cedar Hill School Principal, has been awarded the Central Gwinnett Cluster Foundation 2013 Sparkling Knight Award. Hugh May is the first recipient of this award.
• The Central Gwinnett Cluster Foundation awarded scholarships to Central Gwinnett seniors: Maria Flores, Favour Odetokun and Timmesha Wilkins. 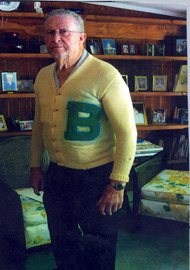 ABAC WAYBACK
Dean Long attended Junior College at the Abraham Baldwin Agricultural College in Tifton, Georgia during the mid 1940’s and he has written an interesting book containing stories about his years at ABAC and the opportunities provided by the school. To purchase the book ABAC WAYBACK call 770-962-6345 or go to Scotland Yard in Downtown Lawrenceville. The short book sells for $5.
NEW CONSTRUCTION IN GRAYSON
Plans are underway to build a clock tower at the intersection of Rosebud Road and Highway 20 in Grayson. Stone similar to other historic buildings in Grayson will be used, plans also include a bell with benches surrounding the structure.
THROUGH THE REAR VIEW MIRROR
• From the May 3, 1920 issue of the News-Herald: It is rumored around that the city fathers will let a contract for the paving of the street around the court house square at a very early date.
• The May 1948 issue of The News-Herald advertised ground beef at 55 cents a pound, franks at 53 cents a pound, salmon 33 cents for a no. 1 can, and catsup for 21 cents for a 14 oz. bottle. 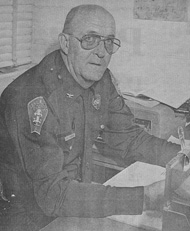 The Lawrenceville City Police Chief during 1978/79 was Louie Schneider, a retired Marine and Vietnam veteran. 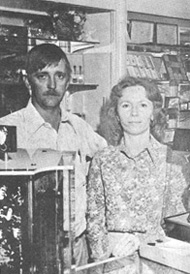 In 1978/79 Louie and Johnnie Fowler, third generation watch makers, were owners of a family run business which began operating on Crogan Street in Downtown Lawrenceville in 1939.

Betty Powell owned and operated Williams Dress Shop beginning in 1958. Shown in the photo taken in the store in 1978: Mary Ann Bradford, Ada Frachiseur, Betty Powell and Ruby Warwick. Jan Rooks was not available for the photo. The dress shop was located at 116 Crogan Street in Lawrenceville. 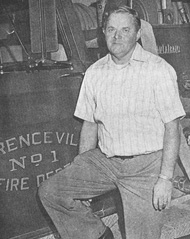 Aaron Kimbrel was Lawrenceville Fire Chief during 1978/79 and there were three full time men and 18 part time workers there. Aaron Kimbrel began working as Fire Chief in 1972.