A vacation to remember 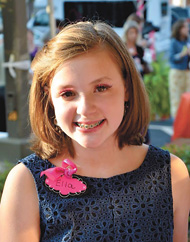 A vacation to remember
By Ella Thomas

My idea for this month’s article fell right into my lap. Well, actually it fell out of my lap. Over Spring Break, my family and I went on a cruise. It was really fun, in the beginning. Our first stop was Labadee, Haiti, where we hung out at the beach for a while.

Our next stop was Falmouth, Jamaica, where we went to a beautiful plantation and learned how to cook some traditional Jamaican dishes. Our last stop was Cozumel, Mexico, where we planned to swim with dolphins (something that I have always wanted to do). That never happened.

Have I mentioned that the language barrier was a problem? For example, before I went into surgery I had to take my nail polish off. Sounds simple, right?  Wrong. You see, the problem was that I had gel nail polish on, so when they came in with normal nail polish remover I knew it wouldn’t work. But I had no way of telling them that, so I had to just peel it off myself. After a few minutes of trying to pantomime it out, we simply gave up and just started peeling it off. Another thing about gel nail polish is that it peels off easily, and in whole pieces. The looks on their faces were so funny! They just stared at me while I peeled it off easily without the aid of the remover. Another example of the language issue was my braces. So, when I was being wheeled into the O.R. the doctors looked at me and said, “You can’t have anything in your mouth.” I tried explaining that I couldn’t take these out, and that there was nothing in my mouth, but my Spanish speaking skills did not go that far. After a while of trying to explain what my braces were (with the help of the doctors who spoke English and were probably very entertained by this exchange) it was all sorted out. The funniest part was that one of the nurses had braces herself!

After surgery, the first day was good. I got to see my appendix (gross!), and when asked whether I would like to keep it or send it to pathology, I made the quick decision of sending it to pathology. The first night, though, was not as good as the day. You see, where we were there were dogs everywhere, which was okay with me because I like dogs. But I don’t like dogs when they are waking me up a 3:00 am barking. There was a really annoying dog right outside our room that barked all throughout the night. Once, it got so loud that my mom just yelled “hush!” and it did, for a second. After that, it just kept on barking the whole night.

Since there wasn’t much to do in the hospital room besides watch Spanish T.V., my mom and I watched a lot of Netflix on her iPad. One show that we got hooked on was Revenge. We watched it constantly! I always talk a lot when I watch movies or T.V. shows (I am very opinionated), so my mom said she could really tell I wasn’t feeling well since I was silent the whole time. As soon as I felt better though, I was talking my mom’s ear off about all of my opinions about the show and what was happening.

After five days of nausea, Mexican hospital food (I don’t even like normal Mexican food, let alone Mexican hospital food), Google translate, and that crazy barking dog, I was free! My brother and dad had been staying at this hotel that was right around the corner from the hospital, and we went to stay there after I was discharged. The hotel was really pretty; it had an open-air lobby, and a pool deck with a view of all of the ships coming into the port. It also had a few channels in good ol’ inglés!

So, after a day of recouping at the hotel, it was time to go home. The first airport we went to was to catch a plane from Cozumel to Cancun. That flight is only fifteen minutes, so I was expecting a small plane. What I wasn’t expecting, however, was the 20 seat plane where everyone has window and an aisle seat, where you feel every single bump in the air, and where you only go up into the air about 1500 feet. That was interesting. After that, we got a flight from the Cancun airport to Atlanta. Anybody interested in seeing Mexico? Well, for the next 86 days I am considered a Mexican immigrant. I’d be glad to show you around!

In conclusion, I got a little more of Mexico than I hoped for, but I also got a great story to tell. So I guess it was a fair trade. Not really.

That’s everything with Ella! (For now…)
Ella
Questions? Comments? Suggestions?
Contact me at everythingella@outlook.com