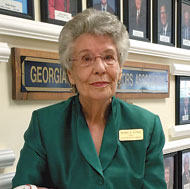 Some of us grumble because we are temporarily deprived of blessings our forefathers never even heard of.

To climb higher remain on the level.

An ordinary liar is one who forgets to keep a partition between his imagination and the facts.

The person who sings his own praises is usually a soloist.

Dogs are clever, they wag their tails and not their tongues.

•Travis Cooper and Jimmy Barron were co-captains of the first Lawrenceville High football team in 1952.

A historic celebration marking the closing of one of the most important educational institutions in Gwinnett County occurred on Saturday September 10, 2016. The event was attended by alumni of Hooper/Renwick, city and county officials and interested citizens. Rubye Wilburn Neal was instrumental in planning the event and Pastor JoeAnn MaLone presided over the program. Serving on the Reunion Committee in addition to Rubye Wilburn Neal were Lillie Livsey Johnson, Viola Hutchins McCalla, Sharon Rogers Jones and Gwendolyn Brown Taylor. The theme was “Honoring the Past 1871-1968.” Hooper/Renwick was located on Neal Boulevard in Lawrenceville and the school closed in 1968 when schools integrated and students from Hooper/Renwick went to Central Gwinnett.

Rocky Knob School was the first school for African American students in Lawrenceville however those students were not afforded a high school education. The Rocky Knob school was on a high hill that ran parallel to Pike Street and the school faced Honeysuckle Avenue. The Rocky Knob School began in 1895 and was destroyed by a tornado in 1924. The school moved to a location off South Clayton Street and on a street later named Neal Boulevard. Mack Renwick donated land on which the school was built and the school became known as Renwick High School. In 1933 Marshall M. Hooper was principal of the school and the first high school commencement was held in 1948. Records show that the name Hooper/Renwick was being used in the early 1950’s.

Naiya McCalla gave the prelude which was followed by the ceremony of the Gwinnett County Sheriff’s Department Color Guard. Minister Jerolene Moore Flood presented the invocation followed by a welcome by Viola Hutchins McCalla. Lillie Livsey Johnson, class of 1962 described the occasion and the school history was related by Gwendolyn Brown Taylor. Ernest Moore, class of 1967 rendered an exciting performance with his drums. Sharon Rogers Jones, class of 1968 introduced the speaker Arielle Thompson and Sharon Rogers Jones class of 1968 presided over the roll call which was responded by many of the school’s alumni. Mayor of Lawrenceville Judy Johnson made remarks and Rubye Wilburn Neal acknowledge those who assisted in making the event possible. Carolyn Carter led the Alma Mater and Pastor Calvin Hopkins said grace before dinner was served.

The Hooper/Renwick building is scheduled to be demolished in the near future, Mayor Johnson stated that a memorial tribute to the school will be placed in the area once occupied by Hooper/Renwick.

On September 14, 2016 friends gathered to celebrate Harold Dudley’s 94th birthday. Harold was born in Columbus, Georgia and has been living in Snellville for the past 51 years. Harold served in the Army Air Corps during WWII, he went to North Africa in 1943 and saw action with Patton and Montgomery, he also served in Italy and participated in military action there. Harold stayed in the Army Air Corps until 1945 when he returned home and enlisted in the reserves. Harold was recalled to active duty in 1950 and was in the Air Force serving in Korea until 1953. Harold was active in establishing military museums at Camp Gordon, Anniston, Leavenworth and was instrumental in establishing the Infantry Museum at Fort Benning, Georgia. He worked as a Scout Executive with Boy Scouts of America and that brought him to Snellville where he maintains an active interest in scouts, military and his many friends who celebrated this milestone in his life with him.

A large group attended the 10th anniversary celebration Kidstuff brunch held at the Georgia Club in Statham on September 14, 2016. Kidstuff has helped children laugh and families grow with a special emphasis on those with special needs. This ministry has worked with families in Georgia and all over the world. Kidstuff was founded by Dr. Lamar and Jean Holley with many volunteers who believe that helping children develop their full potential is of primary importance.

The group toured Lawrenceville on September 23, 2016