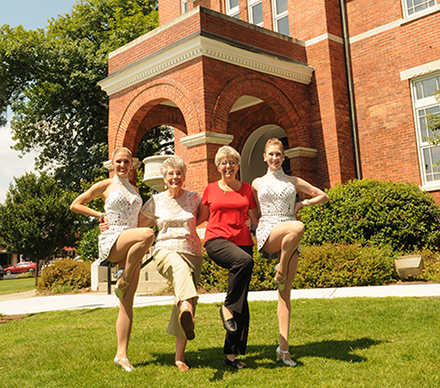 When The Radio City Rockette Christmas Spectacular commercials begin to appear on television, it usually means that the Christmas season is certainly just around the corner. When Rockettes appear in downtown Lawrenceville in early September, what is one to think or do?

Gwinnett Citizen’s Roadrunner, Mary Long, and Lawrenceville Mayor, Judy Jordan Johnson decided that the thing to do was to join them for some rocking great fun.

Two lovely members of the touring company met Mary and the Mayor at the historic Lawrenceville Square for a photo shoot and promotion of this year’s show. For Rockette Joanna Richardson, this trip to Gwinnett County is a homecoming. A graduate of Duluth High School, Joanna is looking forward to performing in Atlanta. “My mom had a dance studio and I danced 6 days a week,” says Joanna. “Having the opportunity to dance with the Rockettes in my hometown is wonderful.”

In addition to promoting the show, the Rockette representatives also become known as an embodiment of the spirit of giving and embracing the community by participating in many great local charitable initiatives including collecting coats and canned food for the needy, visiting children’s hospitals and helping to raise awareness for worthy causes. “My favorite activity is reading bedtime stories to children in the hospital,” says Rockette Alina Duncan who calls Nashville her hometown. “I love to visit with them and see them smile.”

Traversing from Atlanta to New York at Christmastime might bring up thoughts of crowded airports, packed airplanes and impossible luggage issues. But this year, Atlantans will have the opportunity to be magically whisked away on a tour of the best New York has to offer during the season without ever having to leave the comfort of The Cobb Energy Center.

The 2013 production will feature a 50-foot LED screen that will transport the audience to Times Square and Santa’s Workshop with Santa and the Rockettes, using new technology with the Christmas Spectacular’s classic holiday numbers to enhance the production. In a brand new scene, “New York at Christmas,” the Rockettes will board a life size double-decker tour bus, taking audiences on a guided tour through the streets of New York City.  This scene includes show-stopping choreography performed across the landscape of iconic New York City landmarks and culminates in the “crossroads of the world,” Times Square.

Whether it is Times Square or the Lawrenceville Square, the Radio City Rockettes are a site to behold. Sparkling and magical, the young ladies entice everyone around them with dazzling smiles and a graceful spirit as they bring their dance poses to The Lawrenceville Courthouse Square. “We are delighted to have them in our county seat,” says Mayor Judy Jordan Johnson. “They are more than welcome to return at any time.”

“Square dancing” isn’t new to resident Mary Long either. “Former Mayor, Jule Oakes taught lessons and could dance like nobody’s business,” says Mary. Always willing to learn something new, Mary was a quick study on how to position her hands and feet to fit right in with the chorus line. “It was great fun today.”

Rockette-ing around the Lawrenceville Square on a hot, sunny Georgia afternoon is a far cry from Radio City. For the ladies who spent a couple of hours dreaming of a white Christmas, the day was as bright and glittery as the costumes worn by the Rockettes. “It has been such fun to be with these girls,” says Mayor Johnson. “They are just as beautiful inside as they are on the outside.” Promoting the 2013 show and providing a charitable addition to each community they visit is of equal importance to Alina and Joanna. “Endurance, perseverance and dedication have all contributed to their success in life, and they proudly serve as role models for young women everywhere,” says the Rockette organization. The two young women who visited the Lawrenceville Square embodied the best of all these attributes.

Ticket Information
The Radio City Christmas Spectacular presented by Chase, plays at the Cobb Energy Performing Arts Centre as part of the Gas South Broadway Series during the 2013 holiday season for 27 dazzling performances, November 7 – 23, 2013.  A limited number of Premium seats are available for $104.00 – $126.00 and single ticket prices range from $26.00 to $97.00 depending on performance chosen. Tickets for the Radio City Christmas Spectacular are on sale to the public at the Cobb Energy Centre’s Box Office, RadioCityChristmas.com, all Ticketmaster outlet locations, Ticketmaster.com or via phone at 800-745-3000. The box office, located at 2800 Cobb Galleria Parkway, Atlanta, GA 30339, is open Monday thru Friday 10:00 a.m. – 6:00 a.m. and Saturday 10:00 a.m. – 2:00 p.m., closed on Sundays. The venue is located at 2800 Galleria Parkway, Atlanta, GA 30339.  Groups of 10 of more may reserve tickets by contacting group sales at either 770.916.2855 or groups@cobbenergycentre.com.