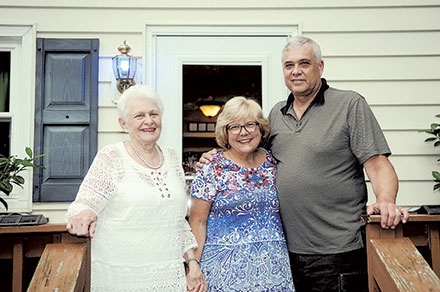 Art and Tina Totten both have demanding jobs; both are respiratory therapists at Gwinnett Medical Center. Art works in Adult Intensive Care, and Tina in Neonatal Intensive Care. So when they headed down to the beach in June for a little rest and relaxation, they were both ready to unwind and enjoy some peace and quiet. Fate, (and Tropical Storm Cindy), on the other hand, had different plans.

On the second day of their trip to the Gulf Coast, Tina wanted to head over to the area known simply as “the jetty,” an area of water protected from the open Gulf by rocks. The water there is calmer, and she wanted to be able to swim without fighting the big waves churned up by the storm. Art –a former lifeguard, life-saving instructor, and competitive swimmer – wanted to enjoy the challenge that the churning waves present to a strong swimmer. Tina acquiesced, still looking forward to reading a Fannie Flagg book she had brought along for some light beach reading.

“We were really surprised to see that, when we got to St. Andrews State Park near the pier, there were double red flags posted,” said Art. Double red flags signify to beach goers that the water is too dangerous for swimming. “Not only were the flags posted, but airplanes were flying overhead warning people to stay on the shore, out of the water,” Art added. “I’ve never seen that before.”

Art grabbed the teen closest to him and swam to shore, with the young man hanging onto his back. “Even when I got him to the shallow water where he could stand up, he was so afraid, he wouldn’t let go of me,” Art said, “but I knew I had to get back out there.”

Tina, by then, had seen what was happening. She rushed to the young boy and was talking to him, telling him he was okay and that he could stand. “He was so exhausted. We had to pull him to the sand, and he just collapsed.”

Fighting the rough waves and deadly currents, Art swam back and got the other teen, pulling him to safety. Then he went back a third time and pulled one of the adult men to safety. “I kept talking to all of them the entire time, telling them they’d be OK, that I had them. But both boys seemed to be in shock. They never said anything back to him. “When I got to the first adult, I was talking to him too, and he just kept saying ‘Thank you, Jesus,’ and things like that.

When there were two men still left in the water, Art could see that one of them had been pulled further out into the Gulf. While he had been fighting and trying to swim earlier, he had stopped. “I knew he was in trouble, so I swam freestyle straight to him, something that lifeguards are always warned not to do, but it was the fastest way to get to him.” Another swimmer came far enough out to throw Art a blow-up swimming inner tube, and while he fought to get to the man who was in dire trouble, another swimmer rescued the other adult.

“When I got to the man who was so far out, I could see he was in need of serious help. He was flailing erratically and struggling very hard to breathe. Having that inner tube to help drag him in was a great help,” said Art.

“By this time, Tina was at the water assisting the swimmers being pulled to shore. When Art had the last swimmer to safety, Tina stepped in. “There was chaos, really. Some of the man’s family members were yelling at him, telling him how foolish he was to be swimming in such rough water,” she said. “I signaled to a little girl to call 9-1-1, and one of the man’s family members said, ‘No, he is not going to the hospital.’ I pulled her aside and said that the man was having difficulty breathing and that he was very likely having a heart attack. She was not his wife, so I made the decision to get professional medical help.” 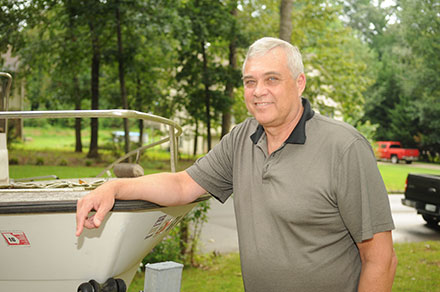 Art Totten saved the lives of five swimmers in the Gulf by acting quickly and without thinking of his own safety.A soon as the EMTs arrived, they took the man immediately to the nearest hospital. All five swimmers survived the harrowing incident, thanks to the help of a couple who hadn’t planned to even be on that beach that day. “A woman told me later that God put me there on that beach that day, and I guess she was right,” Art said, noting that the EMTs and several onlookers shook his hand and thanked him for his heroic acts that day. To this day, he does not know the names of the people he rescued. Probably because they were in a state of shock, none of them talked with him or even thanked him. “You never know how people are going to react when they’re in a situation like that. But I didn’t need a thank-you. I was just glad that I was there.

When asked if she feared for her husband’s safety while all this was going on, Tina replied, “Not once. I know what a strong swimmer he is.” Art’s mom Ellen added, “What a blessing that he has kept up with all of his lifeguard training, and that he is still such a strong swimmer after all these years.”

Art Totten was recognized by the Bay County Sheriff’s Office & Citizens for saving the lives of five individuals from drowning on the beaches of Panama City, Florida on June 24, 2017. Tina was thanked as well for helping the victims onto shore and monitoring their medical conditions until help could arrive.To say that Art is a strong swimmer is an understatement. For his 57th birthday, his wife gave him the present of swimming with the whale sharks and many other “toothy creatures” at the Atlanta Aquarium. “It was an incredible experience,” said Art. That’s right; Art is 63 years old. He braved dangerous conditions and battled exhaustion to save a couple of teenagers, a couple of men in their 30s, and a man in his mid-50s. Did God put him and Tina on that beach that morning? No one can answer that question for sure, but there are probably at least 5 people who would answer, “Yes, He did.”

Incidentally, after having breakfast that morning and before heading to the beach, Art swam 120 laps in the condominium pool for his morning exercise. “When all the excitement was over, I was looking for Art, just to make sure he was OK,” Tina said. “I found him in our beach tent, eating the sandwiches I had packed for our relaxing day by the water!”

The Bay County Sheriff’s Office presented Art with a certificate, thanking him for his bravery and heroism that day. “That is now going to be a family heirloom, handed down from one generation to the next,” said Ellen.