A trip of a lifetime, thanks to ‘charmed’ dog 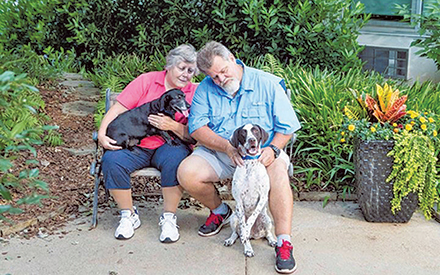 Cindy and Tom Murphy are self-described parents of two dogs, Maddie and Marshall. Maddie is a dachshund whom they rescued eight years ago when her former owners abandoned her. Marshall came to the couple as a puppy a year ago (under some unusual circumstances), and he has led quite a charmed life ever since.

Marshall as a puppy. This photo was included with the Facebook contest that brought Marshall and the Murphys together.“We saw a contest on Facebook, and the contest winner could win a puppy from a breeder called Coast Bound German Shorthaired Pointers (GSPs). We had a GSP named Jaeger for thirteen years, and we loved him so much. We’ve missed him ever since we lost him.” Contestants were asked to write an essay explaining why they should win the adorable puppy. Of course, the Murphys read about the contest and concluded, as many do, that any contest advertised on facebook is a fake one. Still, neither of the Murphys could forget the face of that puppy, nor the face of the one they had loved so much for so many years.

On September 13, 2016, Cindy’s phone rang. “There were so many robocalls right before the election, I just ignored it,” she said. But later that evening, she saw that the caller had left her a message. “It was the breeder, and she said that we had won the puppy!” Cindy said, adding that the call came exactly 3 years to the day that they lost their beloved Jaeger. For Cindy, that was both good news and bad news. She asked herself whether they could responsibly take a puppy. Maddie had ruled the roost for so long, and a puppy could conceivably outlive her lucky owners. 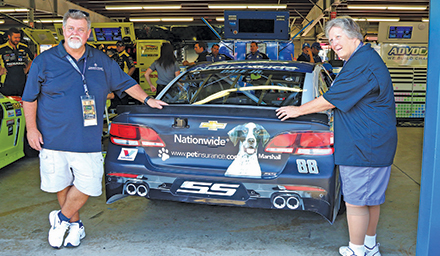 Tom Murphy, sporting a NASCAR “Hot” all-access pass, posed with the #88 car in the garage, just before the inspections took placeThe Murphys were given rare inside access to the drivers’ meeting before the race, and they watched the race from the pit box, trackside (a rare honor, indeed). Nationwide opened their impressive hospitality RVs to them all day Sunday (race day), brought them to the garages where the cars are prepped before the race, and filmed a video of the couple for promotional use in the near future. They met NASCAR drivers and were gifted with a die-cast model of Dale, Jr.’s #88 car with Marshall’s photo gracing the exterior, a replica of the real thing. There were only 6 of those cars made, and the Murphys have one of them, signed by the driver himself. In fact, Cindy and Tom not only met and talked with Dale Earnhardt, Jr., but they also met his dog, Gus, too. “It was unbelievable,” Cindy said, “I keep thinking I’m going to wake up and realize it was all a dream!”

The weekend of the race also encompassed Tom’s Birthday and the couple’s 18th wedding anniversary. To celebrate, they had dinner at a Maine lobster restaurant that’s been on Tom’s bucket list for a long time. The “Marshall magic” of this trip extended to that experience too, as lines to enter the restaurant are long and slow-moving. But Tom, anxious to see inside, was peering through a window when the owner came over to speak to him. Tom explained that they had traveled 1300 miles to eat there, and not only were they invited inside right away, but they were also given a personal tour of the fabulous kitchen, chock full of lobsters in pots and homemade blueberry pies and cobblers. 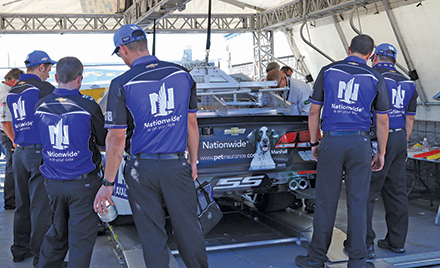 Dale Earnhardt, Jr’s #88 race car featured Marshall’s happy face during the New Hampshire race Sept 23. Here, the car is being inspected pre-raceThe only blip in the dream weekend was when Tom was hit in the face by a flying lug nut as the couple watched the race from the pit box. He was injured, but the accident could have been much worse. The hot metal glanced off the rail around the pit box before hitting Tom. In a sense, Marshall’s luck held true even then, as his owner could have been injured much more seriously than he was.

If there’s a moral to this family’s story, it might be that dogs enrich any family. Maddie and Marshall have brought the Murphys so much happiness over the years that they can’t imagine their lives without them. And every now and then along comes a dog that brings an extra dose of magic, one that “lives under his own rainbow,” as Cindy describes Marshall. The circumstances and timing of his young life, from coming to the Murphy’s home when and how he did, to the whirlwind trip of a lifetime that his family enjoyed because of his intelligent, inquisitive face, may just be a preview of what’s to come in the Murphys’ future.