Mary Hester, CEO of LAN Systems in Berkeley Lake,  greets guests on a sunny Friday afternoon, playing the role of hostess at her company’s annual Earth Day observance. Once a year, on the Thursday or Friday before Earth Day, LAN Systems opens its doors to the public, for both a cookout and the opportunity to bring any old or unwanted electronics for recycling. The event, offered to the public every year since 2008, is a real and necessary observance of Earth Day.

“People don’t know what to do with this stuff once it’s broken, outdated, or they just don’t need it anymore,” Hester said, pointing at boxes piled high with computers, televisions and other electronic items.” This year, on April 20, LAN Systems collected 8 large boxes of items to be recycled, filling almost half of the big box truck that hauled them away. 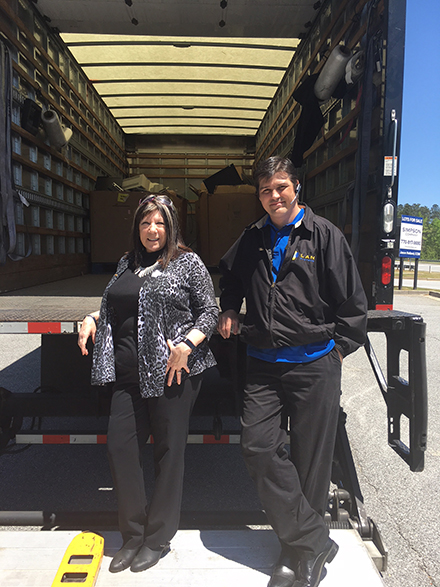 (L-R) Hester and Brooks stop to pose as items for recycling are loaded onto a truck. Hester was “thrilled” to see how many Items LAN Systems collected at this year’s Earth Day recycling event.Lan Systems’ Jonathan Brooks and Josh Stanley, along with Michael Paul of the Piedmont Park Conservancy (the Conservancy is a Lan Systems client), removed the hard drives from every computer that was dropped off for recycling. According to Brooks, “We shred them to protect the person’s data and privacy. Shredding the drive is the only way to be sure that all of the data has been destroyed. The drive is shredded just like paper is shredded. When it’s gone, it’s gone.” Often, people are hesitant to leave their computers anywhere for recycling, because the process of “bleaching” a hard drive isn’t 100 percent effective. 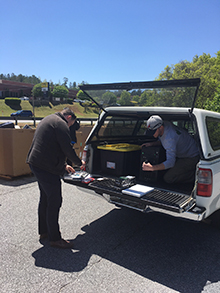 Michael Paul (seated) and Jonathan Brooks remove hard drives from computers dropped off for recyclingBerkeley Lake used to observe Earth Day twice a year, hosting two recycling events and extended garbage pickups every year. Now, the city hosts one annual event, inviting residents to recycle everything from electronics to drugs, with an annual drug “take-back” day in cooperation with police. “We even recycle plants,” Salter said, explaining that residents regularly divide perennials and share other plants with their neighbors.

Of course, Lake Berkeley is the picturesque focal point of the city, and likely an inspiration to all the residents to honor and preserve the natural beauty of the earth. The city hosts several annual events at Berkeley Lake Chapel, a small, quaint non-denominational church that sits on the lake’s shoreline. The Berkeley Lake Conservancy is led by a Master Gardener and comprised of a group of dedicated volunteers. The Conservancy is tasked with maintaining Berkeley lake’s status as a Tree City by planting trees at least once annually. The group also monitors the city’s established green spaces and paths and looks for additional property that could be added to the green space. A couple of times a year, the Conservancy hosts planting events that teach best practices for planting, transplanting and even pruning. 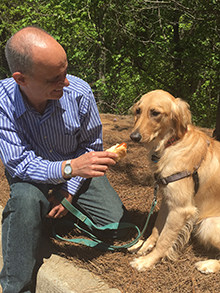 Hal Schlenger (a LAN Systems client) and Rudy, a 1 year old resued Golden Retriever, enjoyed the afternoon and the cookout hosted by Hester and her employees. Schlenger is fostering Rudy until he is ready to be adopted.Salter, who has lived in Berkeley Lake since 1985, remembers seeing a passion for protecting the environment in the city even before protective ordinances and the Conservancy were established. “Our greenspace areas, the lake, and the rich flora found in our city attract the most beautiful birds and animals.”

Berkeley Lake, in fact, is an official bird sanctuary. Beautiful and unusual species can be seen throughout the city. “Not long ago, I watch a blue heron land near the lake. There is a bald eagle that we see here often, too,” Salter said. Ordinances that govern interaction with wild animals, such as feeding and trapping them, are also credited with protecting the natural beauty and delicate balance of life in Berkeley Lake. 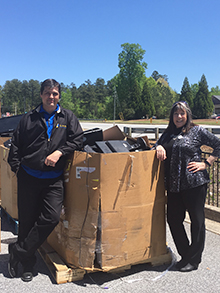 Brooks and Hester with one of the eight boxes of electronics dropped off for recyclingHester was thrilled with the success of LAN Systems’ most recent recycling Earth Day celebration. As word continues to spread about this important event, she hopes to see more boxes filled every year. Anyone can drop off their unwanted electronic items for free during the annual event; even televisions of any size can be recycled, for a nominal fee of $10.

LAN Systems, located at 4711 Peachtree Industrial Boulevard in Berkeley Lake, provides IT services and computer repair. Named one of Atlanta’s Best Places to Work in 2017,  Hester’s company is dedicated to community outreach throughout the year. For more information, visit https://lansystems.com.