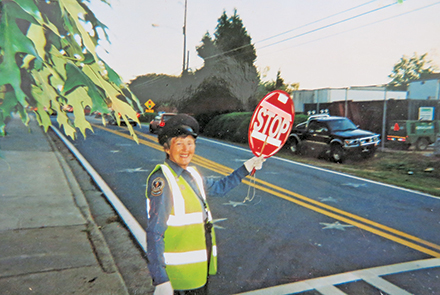 On May 23, 2018, Greta Coble held up her stop sign for the last time and safely assisted one of her students across the street. After 47 years as a school crossing guard, Greta Coble laid down her sign and joined the ranks of the retired after a long, fulfilling job serving her customers.

Customers were what Coble called the people she helped. “Here come my customers,” she would fondly squeal each morning. With endless cheerful enthusiasm, each day she would safely guide them across the street to or from school.

Greta was born in 1940 and grew up in the Snellville area and calls it home. She graduated from South Gwinnett High School in 1958 which was the first graduating class from the high school. That was also where she met her future husband, Robert. When they were 14 and 15 years old. They married in 1960 and had two boys.

Her typical day began at 5am, and she reported to her street at 6:15. “I was supposed to do a half hour, but I was usually there for an hour,” Greta admitted. Then it was on to the cafeteria where she would do laundry, change out trash bags, and cut up fruit. At 8:00 she was back on her street and then back to the lunchroom where she did her chores until 1:30pm. 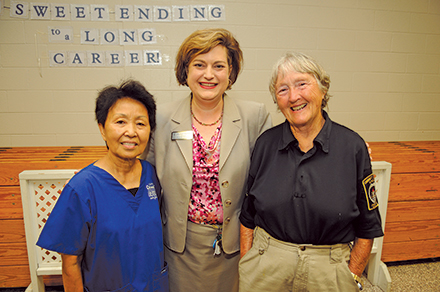 L-R: Fown Tron 15 years, Melissa Madsen, Principal at W.C. Britt Elementary, and Greta Coble 49 years.“At 1:30 I’d be through in the kitchen and would go home to see my dog and cat. The high school would get out at 2:10”, Greta said, “they really move to leave that place,” she said of the students heading home. At 3:00 she would go over and work the street at the elementary school and would finally be back home at 3:30.

Greta became an icon at South Gwinnett, a constant friendly face and a cheerfully waving crossing guard that helped usher her customers, students, cars, and buses. Not only did she have a legion of friends and fans, but she has received numerous recognitions and commendations. A room in her house resembles a museum of framed photos, newspaper articles, plaques, and letters, all expressing their love for her and her stellar performance.

In 2007 they held a “Greta Coble Day,” and she was showered with gifts from her students. “You hear about the bad things kids do these days, but I wanted to tell about the good things they do too,” Greta said of the day which was described in a newspaper article.

Her quaint ranch home is located three houses down from the high school. They purchased it in 1965 for $16,000 paying $100 a month. “My daddy thought we were ruined,” Greta said because of what her father seemed to be such a high price at the time. Long since paid off, the house has been her home for 52 years just down the street from her post.

She has worked at Centerville and R.D. Head schools but the majority of her time was spent guarding the streets around South Gwinnett High School. She works regardless of the weather and has coats and rain-gear for all conditions. She has always been supplied uniforms, and her most recent one was khaki pants and a black sports shirt with a Gwinnett County shoulder patch. 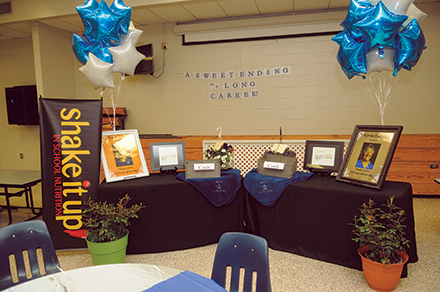 The hardest day that she recalls was at Centerville on the day of a presidential election. “The voters, teachers, and buses all came, and the buses couldn’t pull in,” Greta recalled. “It was a mess, but we eventually got every bus back on the highway. I didn’t think I did a good job, but I later got a letter of commendation!”

In the 47 years of directing thousands of people and vehicles, Greta only had one mishap where she was hit by a car. “I was letting buses out, and a girl leaving high school didn’t see me and hit me. I rolled up over the hood but wasn’t hurt. That was when I could roll better. I went home and wouldn’t report it because I didn’t want her to get in trouble with the law. Those kids are my kids”, Greta said.

There was an average of 250 people a day that Coble directed across the street. Some walked by quietly while many would greet her. “Miss Greta, I love you” she would often hear from her customers.

In the beginning, Coble was paid $25 per month, and when she left, she was being paid $35 per hour. All the money went into a retirement account and now is her time to use it. She plans to work more in her backyard garden, be active in the historical society and her church and maybe get involved with the Senior Center. She has had several retirement dinners already and has received numerous gifts and recognition.

South Gwinnett has enjoyed the efficient services of one of the most beloved, dedicated, and cheerful school crossing guards ever. After 47 years on the job, Greta Coble has earned a well-deserved retirement.