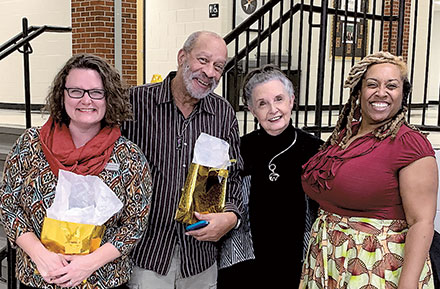 “Artists see the world differently,” said Nancy Gullickson, former Executive Director of the Gwinnett Council for the Arts, at a fine arts competition award ceremony held in her honor.

The Nancy Gullickson Fine Arts Competition was held with the purpose of “foster[ing] the love of arts within the community and [especially] with young people” according to Carolyn Wright, who co-chairs the Arts Community Service program along with Janet Hecht from The Lawrenceville Woman’s Club (LWC).

Both the LWC and the LONA Foundation collaborated to put on the competition held at Central Gwinnett High School in Lawrenceville. The LONA Foundation is a registered 501©3 non-profit whose mission is to foster the arts within the community.

Final contestants at the Nancy Gullickson Fine Arts Competition award ceremony.Now in retirement, Gullickson’s career was largely dedicated to the arts in Gwinnett. She received a Bachelor of Fine Arts from the Mississippi University for and later joined the Lawrenceville Woman’s Club, where she founded the Gwinnett Center for the Arts and served as the Executive for ten years. She held the same title with the Hudgens Center and went on to serve on the board for organizations, including the Gwinnett Convention and Visitors Bureau, Gwinnett Heart Association and the Lawrenceville Downtown Development Authority.

In light of Gullickson’s work to promote all the arts, the competition featured three fine arts categories — Creative Writing, Photography Visual Arts. The entries were due by Jan. 31 and were reviewed by local art professionals, appointed as judges.

The first, second and third place winners for each category received cash prizes, and all 25 participants were recognized with certificates at an awards ceremony held in the school’s cafeteria on Feb. 26 at 6:30 p.m.

A registered 501©3, the Lawrenceville Woman’s Club (LWC) is a volunteer organization with 49 years of service dedicated to creating positive change in the community. Hoping to create a signature event, the LWC’s Arts Community Service program partnered with the LONA Foundation and approached Central's Fine Arts Academy Coordinator, Megan Rose-Houchins with the idea of a fine arts competition. 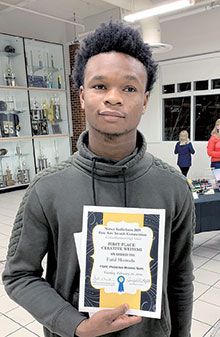 Farid Momodu, a junior, won a $250 first place cash prize for the Creative Writing Category for his submission to the Nancy Gullickson Fine Arts Competition.Many of the of the participants said they felt energized to further harness their craft. Farid Momodu, a junior, won the $250 first place cash prize for Creative Writing and said the competition was just the of what he hopes will be a life-long writing career.

“Even though I didn’t win, it felt good,” Hairston said. “This is the first time getting I wrote out there. I’d definitely do it again!”

JRenee Wason opened the awards ceremony with a lyrically-delivered spoken word performance. Of the work she judged, Wason said, “I was impressed by the caliber of the students’ writing – such great expression. Many were deep, true stories. Some people complain about children only caring about social media [etc.], but the kids really took their time to write deeply, .”

“Knowing that the Arts are too intellectual development and a better quality of life, we wanted to be a part of bringing these to those who might not have access otherwise,” Culberson said. 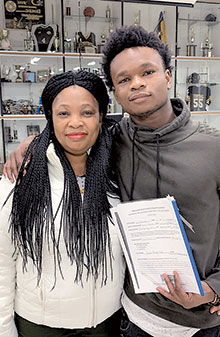 Proud mother Emunet Momodu and her son Farid, a junior, who won first place for the Creative Writing Category at the Nancy Gullickson Fine Arts CompetitionNow living on a lake-front home in Gainesville, Nancy Gullickson said, “Even if they pursue another career having the arts in their makes such a difference. Artists see the world differently, the way the sun touches on the water, the way the moon lights the night’s sky — I notice that a lot now living on the Lake.”

The LWC plans to hold at least one arts competition each year, and while they hope to keep it local, they may expand to include other schools in the Lawrenceville area. For more information about the Lawrenceville Woman’s Club, visit www.lawrencevillewomansclub.org.