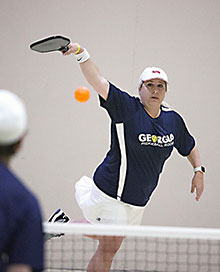 While football may be king of the South, one little known sport is quickly gaining an audience in Gwinnett and across the country. “Pickleball” is emerging as a popular pastime for middle-aged adults seeking a low-intensity sport and for anyone who enjoys trying their ‘underhand’ at something new.

Pickleball is a paddle-based sport which can be played with either single players competing on either side of a court or in doubles matches.

The sport’s origins can be traced to the late 1960s, and while not everyone agrees on how Pickleball got its knee-jerk name, there’s no denying the exponential growth of its fanbase.

Although she’s relatively new to the sport, Kind is preparing to play at the Minto US Open Pickleball Championships in Naples, Florida. In 2018, the city saw an influx of 12,000 visitors from around the world with both players and spectators arriving for a week of matches at East Naples Community Park. The Park released statements revealing they expect to see similar numbers at the 2019 tournament.

“I’m playing on [April] 30th as well as on that Saturday and Sunday, but I’ll be practicing the whole time I’m there. “

The 2019 event runs from April 26th through May 4th, and Kind is prepared to be pickled out. She will be playing in two mixed gender matches with her good friend and doubles partner Tony Moussakhani. Together, they hope to bring home the Gold medal for their division.

As a 4.0 level player, Kind regularly participates in tournaments across the state of Georgia. On April 13th, she won Gold after beating an opposing team who had a higher rank of 4.5.

“I’m a very competitive person, but I tell my parents who are in their 70’s, you don’t have to be as competitive as I am to play. It’s not a strenuous sport, but it’s still a good way to get your heart rate up and exercise without having to pop lunges at the gym.”

Kind is member to a handful of Pickleball clubs both in Gwinnett and across Metro-Atlanta. She plays at a private facility in Smokerise, Sugar Hill, the outdoor court at Suwannee Station, as well as at Bay Creek, Hammond Park in Sandy Springs and Chateau Elan.

While her friends tease that she trains ‘eight days a week,’ Kind knows the importance of drilling from her days as a tennis athlete in college.

“Just think about any other sport you might play. You play how often? But you practice almost every day. So that’s what I try to do.” 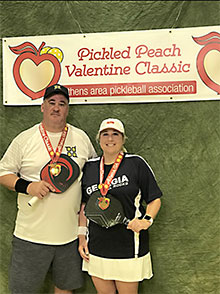 Tony Moussakhani and Kristy Kind are good friends and regular doubles partners and hope to take home Gold when they compete in two the mixed gender matches at the 2019 Minto US Open Pickleball Championships in Naples, Florida.Kind gets her drill practice in three times a week with a friend who happens to be a tennis coach.

According to Kind, Pickleball’s rules aren’t quite like tennis. The court is smaller, and only the serving team can score. Points are recorded evenly, with each score earning a team two points where tournament games might go to 15 or 21, with a two-point win.

Kind isn’t the only one on the Pickleball bandwagon. Gwinnettians are demanding the sport in their neighborhoods and local outdoor facilities. The City of Johns Creek has answered the call by adding courts at Newton Park on Lakefield Drive and at Ocee park on Buice Rd.

“We converted two tennis courts into four Pickleball Courts at Newtown Park . . . we did this out of a recommendation of our strategic plan that our council had approved and as an answer to the demand we were receiving for Pickleball,” said Kirk Franz of Johns Creek’s Parks and Recreation Department. “It is a popular sport. It’s growing quite a bit, and not just older people, but all ages are finding Pickleball is a fun sport to play, and we are happy to include that in some of the offerings at our parks.”

Tony Narcisse, a real estate agent with Palmer House Property, has noted Pickleball Courts are a much sought-after amenity on certain properties.

“One of the properties we were selling was in a neighborhood in Woodstock, and we included in the advertising that it had a Pickleball Court. We were surprised that people responded to the ad just because of the Pickleball mention,” Narcisse said. “It seems there is an emerging interest in Pickleball, and it’s even affecting homebuyer’s decisions.”

As for Kind, she plans to keep swinging her paddle. Since her first match, Kind has upgraded to a Pro Lite Titan paddle which is made of QuadCore Polymer Honeycomb and has a Carbon Fiber Facing. Already, it shows wear marks from where she hits her neon yellow Pickleball.

Ultimately, she hopes to become a signed athlete representing one of the better known Pickleball gear brands, possibly Pro Lite.

Of her newfound passion, Kind said, “It’s so much fun. I tell people it’s like duct tape. It fixes everything.”

To learn more about Pickleball, or to find locations to play the sport in your area, visit the United States of America Pickle Ball Association’s website: https://www.usapa.org.