Horses graze and cows can be heard in the near distance at Big Sky Farm located in Dacula, Ga. The Farm is the home of State Judge Carla Brown, and she keeps company with 10 — and when there are litters — up to 20 dogs.

The state judge has opened her home to provide a base for “Canine Pet Rescue” (CPR), a nonprofit she founded in 2009. Her purpose was to focus on saving German Shepherds from high kill shelters across the state, nursing them back to health and ultimately finding permanent homes.

“Often people will buy a German Shepherd without doing their research on the breed. They don’t train them correctly as puppies, not realizing they are very active and protective dogs, and as they grow bigger, sometimes people mistake that energy as aggression,” Brown explained her emphasis on German Shepherds. 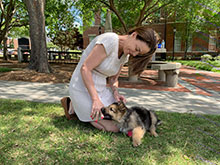 As the CEO of Canine Pet Rescues, State Judge Carla Brown cares for ten dogs at her home. And she brings an injured German Shepherd pup to her office every day as he needs constant attention.Recently, Brown began fostering an injured German Shepherd pup. He is in need of constant attention, so Brown has been bringing him to her office each day. She also cares for two additional foster dogs tucked away in her home as well as the to the seven in the CPR kennel.

One of the dogs up for adoption is Lex, a black German Shepherd. Earlier in the year, Lex was saved from a puppy mill in Montgomery, Ga. along with 400 other German Shepherds. The puppy mill made local headlines after the owner was arrested for animal abuse.

“He’s one of the dogs that had been kept in a kennel his entire life, and never knew what grass felt like. He never really plays with the toys, because he’s still not sure what they’re for,” volunteer Mary Carson said of Lex, who is still recovering from his previous neglect.

Freckles, a nine-year-old mixed Bulldog, is also in the rehab phase. When CPR found Freckles, she was emaciated and in critical health conditions.

“She was one of 12 dogs we took who had been starved by her trainer,” Brown said of Freckles who has put on healthy weight and gained an energetic spark in the few months she’s been at CPR. 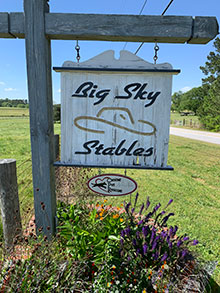 Canine Pet Rescues operates out of Big Sky Farm. It's an upbeat place for the annual Bikes Barks and BBQ fundraiser held May 18th at noon.Kept separately in 5X10 kennels with both indoor and outdoor accesses, the dogs enjoy regular attention. Volunteers will come out to feed and walk the dogs for morning, afternoon and evening shifts. Another seven dogs are cared for in foster homes, where the others will ultimately move to when there is room.

It’s a full-time operation, and Brown is thankful for the help she receives from volunteers and supporters of their mission.

“We have volunteers come by three times a day 365 days out of the year, and we always need more to help fill those duties,” Brown said. “We could not do this work without our amazing volunteer staff.”

With so many incoming dogs, CPR has high expenses each month. Brown says medical expenses are by far the highest expense, and the food bill is at a close second.

“We recently received about $6,000 worth of food from Hollywood Feed in Roswell. They donated 90 bags, and that will go a long way in helping us feed the dogs,” said Volunteer Coordinator Sean Richardson who estimates their food bill comes out to $500 each month.

Richardson admitted that she started volunteering in 2012 as a work requirement, but quickly fell in love with what Brown and the others were doing through CPR.

“To be honest, this has become like therapy for me. The dogs are happy to see you, and it’s just a great feeling knowing that you’re helping an innocent soul,” said Richardson who has fostered a few dogs during her time with CPR. Volunteer information is available online at www.caninepetrescue.com.

Freckles is a nine-year-old mixed Bulldog, up for adoption at Canine Pet Rescue (CPR). When CPR found Freckles, she was emaciated and in critical health conditions. In the months since, Freckles has gained healthy weight and a spark in her step.With 30-acres of green pasture, Big Sky Farm is an upbeat place for social gatherings, and CPR is inviting dog owners near and far to bring their pets for the 2019 Bikes, Barks and BBQ event on May 18th. Motorcycle riders should show up for registration at the Gwinnett Detention Center by 8:00 a.m. They will end up at the Farm for a BBQ which runs from 12:00 -2:30 p.m.

It’s really kind of two separate events. The bike ride starts at the jail and ends here. And around noon, families will start arriving at the Farm for BBQ,” Brown said.

Some of the event’s features include dog demonstrations, bounce houses for the kids, as well as food trucks and craft beer served by Lincoln Fill Station. According to Richardson, 100 percent of the event’s proceeds will go to CPR which is a registered 501(c)3. Vendors and local sponsors can sign up for the event by emailing bbb@caninepetrescues.com or by visiting the following webpage: https://www.caninepetrescue.com/events .

For those yet to discover why dogs are man’s best friends, the BBQ will be an opportunity to learn more about volunteer and adoption opportunities.

To Judge Angela Duncan, who has two dogs from CPR, adopting a rescue can be a win-win situation. “It gives dogs a second chance, and us a first chance to do right by them.”

A list of pictures and stories about each of the dogs at CPR is available online https://www.caninepetrescue.com/available-for-adoption . As Brown says, “It’s all about the dogs!”