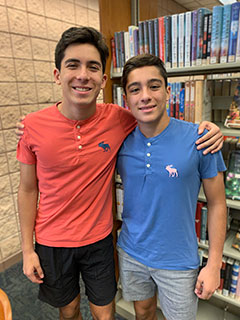 Even before the podcast challenge, the boys had noticed a growing problem at school. In the hallways, in the bathrooms and even in class, kids their age and younger were inhaling vaporized nicotine like it was candy. And many of the teachers and administrators had no idea.

“It’s a big issue in our high school, Juan, age 15, said of the habit which requires a battery run E-cigarette device often referred to as the leading brand name, “Juul” or just a “Vape”. “No one seems to know how bad vaping really is, so we researched it and decided to make that our podcast topic for the challenge.”

The Georgia Department of Health (GDH) conducted a survey showing the number of high school students in Georgia who have used E-cigarettes at least once has increased by 66 percent from 2012 to 2017.  Consequently, the GDH now considers electronic cigarette use among youth is “a major health concern.”

And yet, Marco and Juan find that many of their peers and even teachers aren’t aware that vaping is a huge problem at their school. They formed the non-profit Vaping Attention to Prevention (VATP) for that very reason.

“Our purpose is to educate and prevent future use of E-cigarettes amongst teenagers and adolescents,” Juan said.

To get started, the boys connected with Dr. Ellis from Tennessee and Dr. Halpern-Felsher, the creator of the Stanford Tobacco Prevention Toolkit which provides a wealth of information and research on tobacco, E-cigarettes, and other addictive behaviors.

From there, they were able to address one of their first goals – education. 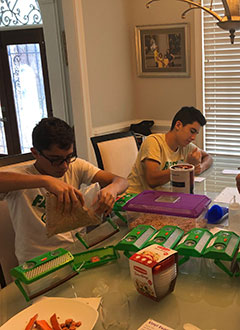 Marco and Juan working with mealworms for their upcoming Science Fair where they will test the effects of "e-juice", the liquid used in E-Cigarettes.Utilizing their research, the boys have designed both middle school and high school curriculum with PowerPoint slides about vaping, its harmful effects as well as prevention strategies. They hope the curriculum will be integrated into health classes in both middle schools and high schools.

Rome wasn’t built in a day, and the boys know that the best strategy is to start small at their own high school. With the help of their teacher sponsor, Mr. Gillis, they’re working on getting a club formalized for fall 2019 to attract more students to become VATP ambassadors and start hosting school-wide meetings.

“We think teens are more likely to listen to other teens than if it were an adult telling them not to vape,” said Marco who is fully invested in training their growing ranks of student ambassadors.

Kids from their soccer team were among the first to join the club. Other ambassadors got involved online connecting from other states through social media, and they now have a total of five student ambassadors.

Each of these youth ambassadors will be required to complete a “Train the Trainer” Toolkit which condenses their curriculum into four engaging modules for ambassadors to pick one every nine weeks and create their own marketing campaign to make vaping “not cool.” The program should be ready by fall 2019.
Consulting with their mom, Justine Henao, who is a physician at a local hospital, the boys realized it’s important to also educate parents and teachers. As Dr. Henao points out, “Some don’t even know what these things look like.”

E-cigarettes are battery-run, smoking devices operated by heat and use a liquid called “e-juice” to create their distinctive vapor. The devices are particularly convenient for teenagers to use because they are produced to look like common objects including USB’s, pens and sharpeners.

“A lot of our friends vape. Some kids do it in the bathroom, and it doesn’t leave a smell like cigarettes do. Some kids even do it in the back of the classroom because they have vapes that hardly put out any smoke,” Marco said.

To educate youth, parents, and anyone interested in learning more about what vaping does to the human and teen body, Juan and Marco are now planning the first VATP town hall to take place sometime this summer. The meeting will be hosted alongside Truth Initiative, a nonprofit dedicated to inspiring individuals to live tobacco-free lives. 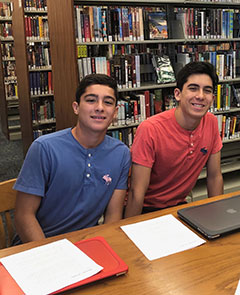 L-R: Twin brothers Marco (in blue) and Juan (in red) during a meeting with Truth Initiative.At their initial meeting, Juan and Marco proposed several partnership opportunities with Truth. Vincent Irving, who works for the nonprofit, was highly impressed with the boys’ initiative. “It takes teens like Marco and Juan to notice issues, learn about the impact those issues are having, and then gather resources, to create positive generational change. The fact that they have taken the initiative to mobilize teens across the country around this issue is extremely motivating.”

To build the case, the boys plan to do their own research.  They are working on a Science Fair project to test the effects of e-juice on mealworms for the upcoming school year. Through the project, they hope to shed light on the effects vaping has on human cells.

As a health professional, Dr. Henao is particularly curious about the long-term effects of vaping and how it remains largely undocumented and enshrouded in myth. She’s proud her sons are working to change that.

“I’m glad, but not exactly surprised the boys have gotten so involved with this. I wouldn’t expect anything less because they’re always very motivated and hard working. They always put 110 percent into something,” Dr. Henao said.

Research and politics aside, if the Borrego twins can make vaping seem less cool, maybe they have a chance of reversing the trend and preventing younger generations from following the fad altogether.