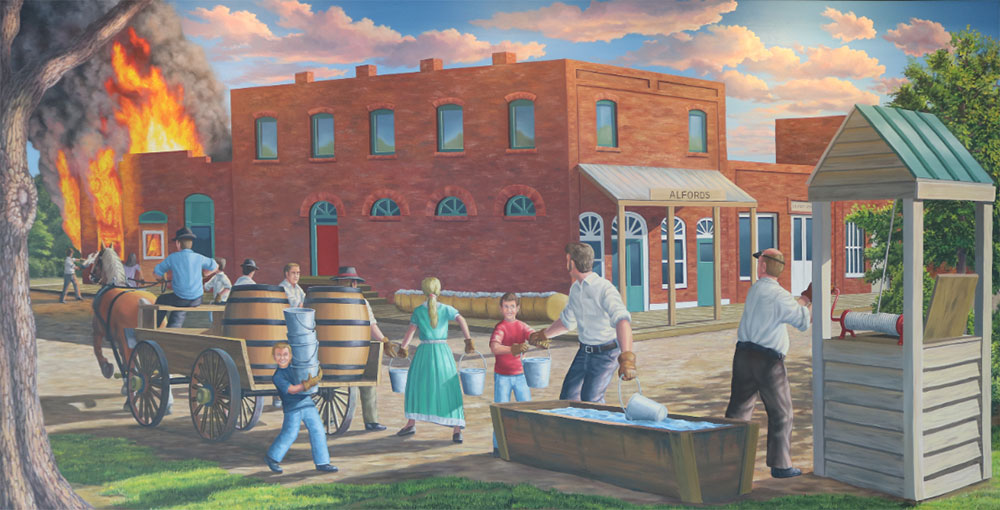 A devastating fire that raged in the early morning hours of Nov. 15, 1920, almost wiping out the downtown area of Lilburn, will be commemorated on the 100th Anniversary of when the community’s heroic volunteer “bucket brigade” saved the town. 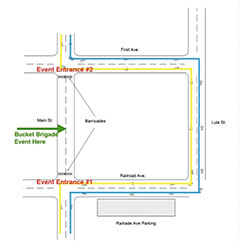 The event, Bucket Brigade Day, will be held this Sunday, November 15, as the bucket brigade will be reenacted from 3 to 5 p.m. in downtown Lilburn.

Hosting the event are the Lilburn Main Street program and many Old Town Lilburn business owners. Main Street in Old Town Lilburn (from Railroad Avenue to 1st Avenue) will be closed off for a street party as festivities will be conducted, rain or shine. The business leaders’ group decided to thank and remember the original “bucket brigade” by conducting a re-enactment of the volunteers’ heroics.

“We believe our residents, business owners, local government, schools, and various civic groups are a continuation of that original “bucket brigade,” ensuring that Lilburn continues to be a great place to live and visit,” Dunn said at a recent city council meeting in which he read a proclamation for this event.

In celebrating the town’s history, live music will be provided, and food and drinks will be available from 1910 Public House.

While attending the event, participants can donate $20 to get a one-year “bucket brigade membership" which includes a year of discounts from many Old Town businesses, “official bucket brigade cup,” and some exclusive Lilburn merchandise items. All proceeds will go toward the creation and installation of historical marker signs around Old Town Lilburn that share the history of the town.

The fire apparently started at the Lilburn Supply Company in downtown Lilburn. Frank Garner, who lived across the street from the company, made the discovery on that cold November morning, as the entire business section of the town was destroyed except for two stores, according to information on the City of Lilburn’s web page. Only the heroic work of the volunteer bucket brigade saved the residential area of town.

About the only newspaper at the time who reported this fire was The News-Herald, published twice a week in Lawrenceville, Georgia.

From its Thursday, November 18, 1920 edition, the News-Herald reported the story under the headline: “Lilburn To Probe Origin of Big Fire.”

Its lead paragraph: “Lilburn was visited by a disastrous fire early Monday morning (November 15) which practically wiped out the business section of the town.”

The fire had built up so much momentum, that very little could be done to stop the spread by the time Garner discovered it. That’s when the bucket brigade went to work, as volunteers showed up to douse the fire bucket-by-bucket from a nearby well. The fire ate its way toward the east entrance of the supply company, destroying it.
Apparently, there was some kind of “suspicious circumstance” noted with the origin of the fire, the paper reported.

“It is said that the next Grand Jury will be asked to investigate the origin of the fire and detectives may be put to work on the case,” the story from 1920 continues. The total fire loss was placed at over $60,000.

Here is a rundown of the destruction that the fire reportedly caused:

• The Bank of Lilburn was badly damaged.

• N.G. Bennett’s new grocery store was completely wiped out with no insurance.

• J.S. Shettleworth lost his warehouse and a large lot of lumber. Several bales of cotton in the warehouse were saved, but no insurance was reported.

• Lee’s Grocery Store, with no insurance, was destroyed with all its stock.

• J.S. Young’s residence was badly damaged, and his smokehouse, “containing a lot of meat,” was destroyed.

“It has not been decided yet as to whether the buildings will be replaced,” the story concluded.

How did Lilburn get its name? Was it because of the great fire of 1920?

According to Wikipedia, the city was founded in 1890 by Seaboard Air Line Railway. The town was previously known as “McDaniel,” but was renamed after Lilburn Trigg Myers of Virginia, the general superintendent of the railroad. However, this name change apparently was not confirmed by researchers until the 1990’s.

Prosperity took a back seat to the fire and hard economic times, but a revitalization of the old town emerged with restaurants, businesses, and retail shopping. And, the town grew and prospered, and was incorporated as Lilburn on July 27, 1910.

For the festivities, COVID-19 safety measures will be in place. Because of the pandemic, the city will not allow more than 250 people at this event. Social distancing methods will be in place for all activities. Participants are strongly recommended to follow CDC guidelines by wearing a mask and respecting the six-foot social distancing requirement. Persons who are sick or have COVID-19 symptoms are asked to stay at home.

For more information on this event on Main Street, see: