A conversation with Clyde Strickland: America needs a “Faith-lift” 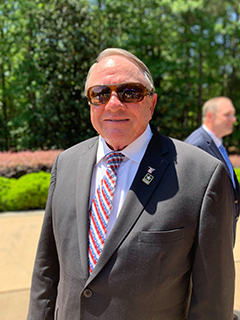 In light of the disaster that was 2020, and the hope of 2021 getting off to a better start, it’s easy to sit back and be an armchair quarterback when it comes to making sense of current events, specifically what happened on Wednesday Jan. 6.

The wheels came off the collective wagon, so to speak, or maybe the world had lost its collective mind. To Clyde Strickland, a man who needs no introduction to Gwinnett County, it came as no surprise.

The country had been heading down this road for some time now.

“There is something missing in America today, people have lost all sense of respect for one another,” Strickland said from a comfortable seat in front of his fireplace. “It is about respect, honor and principle. We’ve lost it. Something is missing.”

For about 90 minutes on the day following the Capitol riots, Clyde Strickland held court in the basement of his Lawrenceville home, seated in a comfortable chair before a warm fire. And he shared his thoughts on things…

Political differences are one thing, but respect for the office of the President of the United States rises above these differences, Strickland said. For him, it’s a key point of leadership.

“You may not like the man, but you respect the office,” he said. “It doesn’t matter who’s in there. You honor him and take his orders.”

One look at the man’s taste in socks should answer any questions about his patriotism.

“It’s a mess, but we got through Carter and his 21 percent. We got through Obama. We’ll get through this. We just keep on moving forward. We never stop. Everything will be good.”

His conversation always gravitates back to his longtime pet project, the Peace Park. Getting the park off the ground and assimilated into the mainstream classroom has been at the center of his thoughts and actions for the past 30 years.

Strickland took it a step further.

It’s about people being people, and being good people, he said, and getting back to that basic ideal – respect.

“We have got to learn how to sit down and talk to one another and have a conversation, and we’ve got to love one another.”

Strickland said if it hadn’t been for the COVID-19 pandemic, the Peace Park would be up and running, instead of at about 60 percent complete and his Peace curriculum would be taught in Georgia’s public schools and universities.

“The pandemic got things sidetracked a little bit,” he said. “But it’s coming along.”

A longtime businessman and entrepreneur, Strickland operates like a business. You do what you have to do under the circumstances.

Strickland said he and his wife, Sandra wear masks in public. Being octogenarians, they are both in the high-risk group and are dealing with their own personal health issues.

“I’ve had a stint put in my heart, the inner lining of my lungs are wearing out, and my wife is diabetic, but we never stopped living,” he said. “We just keep on living. We have protected ourselves with masks and sanitizers and all this stuff all the time, but we have never stopped eating out and going and doing stuff since this started. We respect it, but we protect ourselves. We wear our masks. The only time we didn’t have masks on was when we were eating.”

“We took the power away from the police,” he said. “We have lost control of the police departments, because any time a person is afraid of doing their job, you’ve lost.”

The woman who had been shot and killed at the U.S. Capitol had charged the police. “She was on the front line,” he said. “She charged the police and the security guard told her to stop and she didn’t. He was doing his job and he shot her.” He was protecting others.

They have already exceeded their lifetime expectancy. When Strickland and his brother did their last estate planning a couple years, they ran all these different tables and tests for insurance purposes. As a result, Strickland has a good idea as to how much time he has left, something a lot of people don’t care to know, but Clyde wants to lay his cards on the table.

Doctors say he won’t be able to take another major operation. His heart won’t take it.

Strickland will set up a foundation, for eternity, to make sure what he’s started gets finished and is sustained over time. Peace, to him, it’s his legacy.
“Our legacy will go on and on and on,” he said.

The world can’t continue on its plotted course and he knows this problem will continue long after he’s gone. His three children will manage his foundation.

“We support 34 charities right now. When we die we want those charities to be taken care of, and ten percent of those funds we want to go to God’s work. That’s his house. He says, ‘Take the tithes to my house. Ten percent goes to his house in tithing and all the rest of it is just given. When God is talking about tithing he talks about giving 10 percent to his house. Last year we gave 63 percent of everything we made to charity and we still took care of more than 400 employees.”

“We ain’t going to take it with us,” he said. “We’ve lived good. Everything we’ve touched in 58 years has turned to gold. First, I married an angel in Sandra. The first week we were married we started tithing. We live like we’re broke. We don’t have to eat at Frankie’s Steakhouse every week.”

Back to the Peace Park.

“People started realizing, this Peace Park concept made a little sense,” he said. “People bought into the idea and if it weren’t for the pandemic, we’d have this in colleges and the Peace Park would be here.”

The intent of the Peace Park is to bring national attention to Atlanta and to create peace coming out of Atlanta that will make peace throughout the whole world.

He continues his work to change his home and country, to bring respect, honor and principle back into today’s lifestyle. Strickland has partnered with Rodney Cook Jr., a visionary, like himself to get this Peace Park and Peace University built and completed.

“The Nobel Peace Prize people want to move their headquarters here,” he said. “Georgia is known as ‘The Peach State,’ but we want it to be called ‘The Peace State.’”

Strickland believes the reason the Peace Park will bring everybody together, “In all the meetings I’ve ever had, everybody is in harmony, and I feel like when we open the Peace Park and people go into this park and they see it’s all about peace and love, it’s going to have a life-change experience for them. People will be coming here from all over the world to see this beautiful park. It’s going to be impressive.

You have to have a mentor, Strickland said. Someone who has made the journey before you who you can look to for guidance.

“My mentor was Truett Cathy,” he said. “He was a good and honest man.”

For Strickland, it would help his soul rest if he could be someone in 20 years who inspired someone young coming along after him and perhaps be a mentor through his legacy.

“We have always lived to help someone else rather than help ourselves,” he said. “We’ve always lived that way for the past 58 years. I’ve been blessed my entire life. Everything I tried to do, I got good at. I can do 21 different trades with these hands.”

Strickland and Sandra have their names on enough buildings, so it’s not important what they name the Peace Park. It’s more important to him that the park is successful, and lasting.

Strickland is quick to point out, he and his wife don’t believe in giving handouts.

“We believe in hand ups,” he said. “Faith without deeds is no help at all. If we help somebody, they have to want to help themselves. The Peace Park is going to be a place where people are going to want to come to from all over the world, to see what a great place Atlanta is.

“I’m a visionary. I see things and I work on getting it done,” he said.

On history, good and bad.

“History is what binds us together. We have to acknowledge where we’ve been. I think the Confederate generals and people who helped form this country need to be honored. That doesn’t mean we need to fly a Confederate flag at the capitol, but we need to acknowledge those who came before us. The bedrock of this country is the history that built it.”

Strickland hopes his personal history and deeds – remember, faith without deeds is nothing – will be an inspiration to those that follow him.

It’s not about dollar signs, it’s about what you do with wealth instead.

“I may not be the richest man in Lawrenceville but I’m close to it. I was born on a sharecropper’s farm in eastern North Carolina. I was a millionaire before I could spell ‘million.’ God has been good to us.”

Strickland’s plans is to kick the snowball down the hill, so to speak.

“We want to get things started, and then make sure it keeps going long after we’re all gone,” he said.