Leaping into a new season 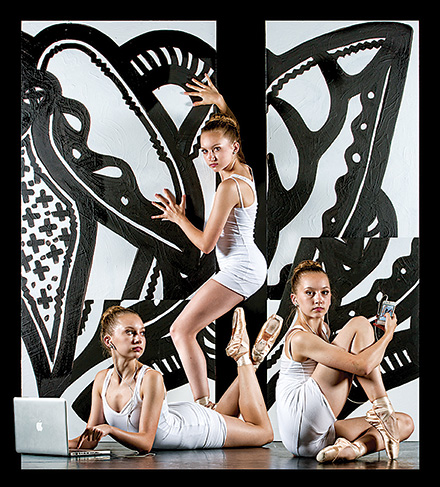 Gwinnett Ballet Theatre might be the oldest performing arts non-profit in Gwinnett, but everything this season is fresh and new! This includes the 33rd anniversary of The Nutcracker, which is the second largest in the metro Atlanta area and a holiday tradition for thousands of families.

Beginning in October, GBT will offer three productions which include two new ballets and the Georgia premiere of a full length story ballet. It also offers a collaboration with an exciting young visual artist from Gwinnett, Mac Stewart.

The season begins on October 4th and 5th when the company presents “19-20-21.” This title represents 3 pieces on the program, with each danced to the music of the 19th, 20th, or 21st century. 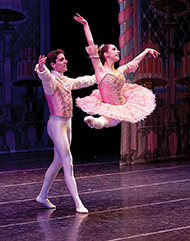 Pictured to the right is Madison Green, will be performing the role of ‘Nikia’ in the ‘Kingdom of the Shades’ selection from GBT’s October production, ’19-20-21.’ Pictured with her, left, is Francisco Serrano. Photo by Richard Calmes

The 19th century was the era of great classical ballets. GBT will perform the beautiful scene “The Kingdom of the Shades” from the ballet “La Bayadere.” This piece will include a large corp de ballet all dressed in white representing angels, plus an exquisite pas de deux and demanding variations from soloists. This is pure classical ballet at its finest, and a work that has not been produced in the Atlanta area within memory.

Partnering the GBT ballerina will be a young man who recently graduated from the prestigious Nutmeg Conservatory, Martino Sauter. Martino, who has also performed with MOMIX Dance Company, will be living in Atlanta and working with GBT throughout the year.

Second on the program is “Time,” a neoclassical ballet choreographed by GBT teacher and Atlanta Ballet alumnus David Blumenfeld. This work is a premiere and the piece will be performed to the music of Philip Glass, a great late-20th century composer whose minimalist style is counterbalanced by his classicist structure. 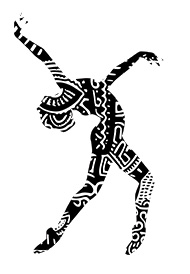 The third piece is also a premiere, a contemporary ballet by Wade Walthall called “Pictures.” Walthall was inspired to create the ballet by the work of Mac Stewart, a 19 year old prodigy whose visual art is attracting attention and praise from the Atlanta arts community and beyond. Mac’s style uses very bold lines, geometric shapes, and detailed patterns, and these qualities will undoubtedly be reflected in the choreography.

Pictured to the left is a Silhouette of a GBT dancer ‘filled in” with Gwinnett artist Mac Stewart signature designs. Photo by Richard Calmes

Stewart will be contributing designs for the sets and inspiration for the costumes. He is excited about the collaboration, saying, “I look forward to working with Wade Walthall on this original ballet he will be creating. He’s an amazing dancer and creative choreographer. I’m really looking forward to the collaboration.”

Stewart was invited to be one of the artists for Atlanta’s “Living Walls,” an innovative annual arts event which has attracted international attention. Stewart created his wall located at 156 Forsyth Street in downtown Atlanta, and he was recently highlighted in a story published by the Atlanta Journal Constitution. 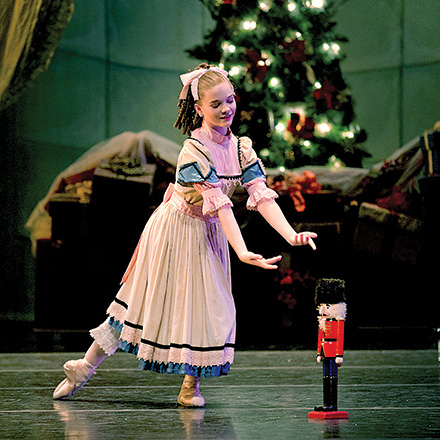 Claire Collier is the young Clara in GBT’s The Nutcracker. Photo by Richard Calmes

GBT’s “The Nutcracker” returns December 5-21 at the Gwinnett Perform-ing Arts Center. 2014 marks the 33rd year that GBT has offered this family favorite to the community. That “community” has actually expanded to include all of Atlanta and North Georgia, according to audience interviews conducted in the lobby before the shows. People from all over the state have discovered that they can enjoy a traditionally told Nutcracker with very high quality dancing, complete with live orchestra, at a venue where every seat is good and the parking is free. Last year’s Nutcracker sold 1,000 more tickets than the year before, with the last 2 weeks sold out. Better get those tickets soon! 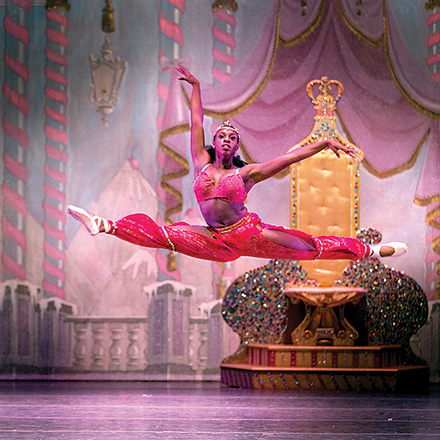 Bianca Melidor is the Arabian Princess in GBT’s The Nutcracker. Photo by Richard Calmes

GBT completes their season on March 28 and 29 with the Georgia premiere of “Journey,” a contemporary, three-act story ballet.

“Journey is an everyman fairy tale of the stars which follows a young man through various stages of his life,” explains Walthall. “He is led by the stars to the choice of love or familiarity. His decision is one that all have to make. ‘Journey’ is ballet of the mind, body and spirit with music that moves the heart, a story of a universal experience but unique to each individual.”

“Journey” will utilize a large cast of dancers of varying ages, and it is performed to the music of Rachmaninoff, Gorecki and Nyland.

GBT has grown steadily over the past few years. Studios were moved to the 20,000 square foot facility at 1800 Macleod Dr., Lawrenceville, just across Sugarloaf Parkway from Gwinnett Tech. The building contains 5 state of the art studios with special Marley-covered flooring, and 3 pianos. Approximately 200 students are taught by the finest staff available.

Another inspiring GBT story concerns its new School Administrator, Whitney Sue Jones, now Whitney Snuggs. Arriving as a little student at the age of 4, she became a leading dancer for GBT, performing Sugar Plum in the Nutcracker as well as many other leading roles. She has now grown into a position to shepherd the school into the future. She also teaches third grade at Winn Holt Elementary, and she has guided GBT’s outreach effort, the Dance Project, into a nationally recognized and respected program. Last year, the Dance Project received a $10,000 matching grant from the National Endowment for the Arts.

It is not too late to begin classes and be a part of all the excitement! Registra-tion is always open for new students. However, anyone who wants to audition for this year’s “The Nutcracker” needs to sign up soon! Auditions will be held on September 16 and 18. GBT also offers a recreational ballet class for teens and adults on Tuesdays from 7-8 pm.

For more information about GBT, please visit the web site at www.gwinnettballet.org or call 770-237-0046.