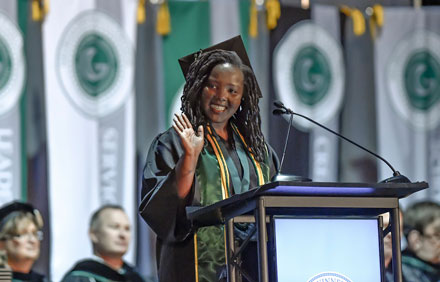 An inspirational speech by a Georgia Gwinnett College graduating senior has gone viral, bringing praise from around the globe.

Olivia Mugenga, a native of Rwanda, was selected to represent her graduating class as part of the GGC’s fall commencement ceremony program, held Dec. 17 at the Infinite Energy Forum in Lawrenceville, Ga.

In her speech, Mugenga paid tribute to her father, Joseph Mugenga, who had to raise four daughters alone after his wife was killed in the 1994 Rwandan genocide. Because of ongoing unrest in his country in the early 2000s, he was wrongfully imprisoned for two years. During that time, sent his daughters to Belgium to continue their studies. As a child, he had walked 11 miles to school and ultimately graduated with an MBA from a U.S. college, so he was determined to give his daughters an education.

“And that was my first lesson in life: be resilient, the God that watches over you never sleeps,” Mugenga said of her father’s experiences.

”You would think that I had a miserable childhood,” Mugenga said. “But I had a very happy childhood -- not because we had it all but because my father’s love for his children was bigger than any of the tragedies we faced. He told my sisters and me that no matter what anyone said, the truth was that we were intelligent, beautiful, strong … and because he said it, I believed it.”

Later, the daughters came to the U.S. to attend college. Mugenga followed one of her older sisters to Georgia Gwinnett College, known for its diversity and mentorship-focused educational experience. GGC is ranked as the most diverse Southern regional college, both public and private, by U.S. News & World Report (2015 and 2016).  International students represent an impressive 10 percent of the student body.

“When I arrived at GGC, despite my limited English, I looked at the brilliant professors, looked at the diverse student body, felt the atmosphere and I smiled because I truly genuinely felt at home,” she said.

“I was not the smartest or bravest student, but like my father, GGC insisted that it saw greatness in me until I saw it in myself. GGC did not define me by my country’s history. Instead, the people of this college believed in me and provided me with opportunity after opportunity.”

Mugenga mastered English, and quickly became recognized as a prominent student leader at GGC. She co-founded African Voice, a service-oriented student organization promoting African heritage, and served the Student Government Association as a senator for the School of Business. She worked as a resident assistant and in the library to pay for her college expenses. She was a member of the GGC Honors Program and graduated with honors, earning a bachelor’s degree in business administration.

“I am not merely a kid from a genocide-torn country,” she said. “I am a college graduate! My plans are to attend law school and study human rights.”

In concluding her speech, Mugenga evoked Isaac Newton’s words, “If I have seen further, it is by standing on the shoulders of giants.”

“We all have our giants who have made this day possible, and who have enabled all of us to see further … to college, to receiving our degrees, and to embarking on our futures,” she said. “My giants have included my professors, my friends, my family, and most of all, my father.” She then turned to the college’s video camera and greeted him, as he was watching the ceremony from Rwanda via live stream.

After her standing ovation, Preczewski had Olivia turn around so the audience, and her father, could see that she had decorated the top of her mortar board with the words, “Making Daddy Proud.”