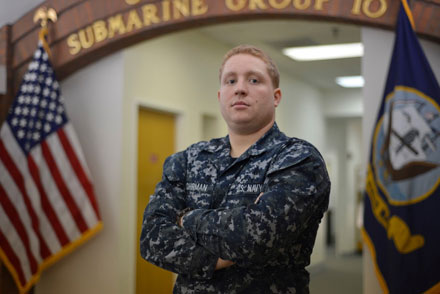 A 2008 South Gwinnett High School graduate and Snellville, Georgia native is serving in the U.S. Navy as part of a crew working aboard one of the world’s most advanced ballistic missile submarines, USS Maryland (SSBN 738).

A Navy electricians mate is responsible for all electrical equipment.

“Everyone has your back in this command," said Fohrman. "Everyone is there to get the job done and help each other."

Measuring 560 feet long, 42 feet wide and weighing more than 16,500 tons, a nuclear-powered propulsion system helps push the ship through the water at more than 20 knots.

The Navy’s ballistic missile submarines, often referred to as “boomers,” serve as an undetectable launch platform for intercontinental ballistic missiles. They are designed specifically for stealth, extended patrols and the precise delivery of missiles if directed by the President. The Ohio-class design allows the submarines to operate for 15 or more years between major overhauls. On average, the submarines spend 77 days at sea followed by 35 days in-port for maintenance.

"We demand the highest standards from our Sailors - both professionally and personally," said Rear Admiral Randy Crites, Commander, Submarine Group Ten in Kings Bay, Ga. "Petty Officer Fohrman's chain of command, family and our great nation take immense pride in his devotion and service to his country. The importance of our Sailors is immeasurable; people like Troy Fohrman are absolutely crucial to ensuring our Ships and Submarines are operating at their best - always mission ready, providing our Nation with the greatest Navy the world has ever known. I'm so very proud he is on our team."

Fohrman is part of the boat’s gold crew, one of the two rotating crews, which allow the ship to be deployed on missions more often without taxing one crew too much.  A typical crew on this submarine is approximately 150 officers and enlisted Sailors.

Because of the stressful environment aboard submarines, personnel are accepted only after rigorous testing and observation. Submariners are some of the most highly trained and skilled people in the Navy. The training is highly technical and each crew has to be able to operate, maintain, and repair every system or piece of equipment on board.

Regardless of their specialty, everyone also has to learn how everything on the ship works and how to respond in emergencies to become “qualified in submarines” and earn the right to wear the coveted gold or silver dolphins on their uniform.

“This crew is very personable and everyone has been very welcoming,” Fohrman said.

Although it is difficult for most people to imagine living on a submarine, challenging submarine living conditions actually build strong fellowship among the crew. The crews are highly motivated, and quickly adapt to changing conditions.  It is a busy life of specialized work, watches, and drills.

As a member of one of the U.S. Navy’s most relied upon assets, Fohrman and other Maryland sailors know they are part of a legacy that will last beyond their lifetimes.

“The Navy has taught me how to get things done," Fohrman added. "I've learned how to and who to go to when you need to learn something new."