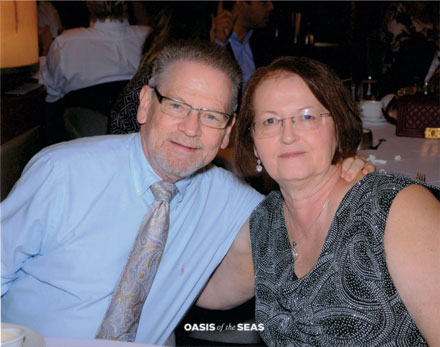 High school sweethearts... in the movies, it is all romance and happily-ever-afters. For Tim and Joyce Reiling, it was a start, but not the stuff movies are made of...that part came several years later.

Married for 6 years, divorced for 16, and remarried for 27 means that even a fickle Magic 8 Ball would have to say “It is likely” this pair has what it takes to stay in love.

The couple married about a year and a half after graduating from their Huntsville, AL high school and moved to Anoka, Minnesota where their daughter, Teresa was born. Six years into their marriage, the romance and thoughts of forever froze over with the Minnesota winter. Joyce moved back to Huntsville for a job with the Department of Defense and Tim eventually made his way to California. 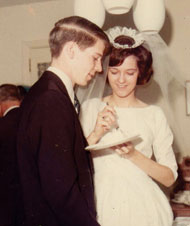 Left: Tim and Joyce at their first wedding

The story certainly didn’t end there. Everyone deserves a second chance, especially when the heart still loves. It turned out the second time around was the charm as true love prevailed some twenty years after the pair first met. “Tim invited me to come visit him in San Francisco for my 40th birthday,” says Joyce. We had a great time over several days and he invited me back for his brother’s wedding.” Tim admits he wasn’t the “family favorite” where Joyce’s family was concerned, but he knew he still loved her enough to prove himself worthy of a second chance.

“I talked her into moving there, much to everyone's displeasure!” says Tim. Joyce took the chance and transferred from her USDA job in Atlanta to the San Jose offices. “I know she was concerned she would get dumped, but little did she know what I had planned.” Tim’s plans, no matter how carefully laid, did have a few glitches as he revealed an elaborate ruse to get Joyce to Reno for a wedding. It involved his brother and sister-in-law to help make the trip look like... just a trip. The plans did not call for an 11 hour drive with snow chains and an overnight delay. “They finally just told me we were going to Reno so we could be married,” says Joyce. “It was such a surprise for New Year’s Eve 1988!” 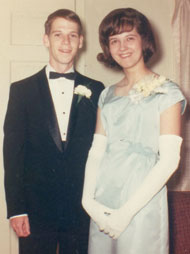 Right: The couple, pictured at their senior prom, were high school sweethearts

The pair spent the next several years rebuilding their relationship. They had never really fallen out of love, but time and circumstances had taken a huge toll. Together, they found a way to love, live and grow. In 2001, Tim and Joyce moved to Atlanta in order to be closer to their family and grandchildren. “We only got to see them once a year,” says Tim. “They came out to California to visit-our granddaughter, Emmie, ran right into my arms and that was it - I was in love.” Tim and Joyce missed Teresa, Jake and Emmie so much that they packed up the house, Joyce requested, and got a transfer back to Atlanta, and the two set off cross country to relocate one more time.

They bought a house in Snellville where they were able to have sleepovers, watch hours of America’s Funniest Videos, attend sports and ballet events and watch their grandkids grow up. “They are in college now, but we had a ball - we just laughed all the time,” says Joyce. “Now, we have Lily who just turned six - she is a hoot - she keeps us entertained and dances all the time.”

Today, Tim and Joyce own a business together in Snellville. Joyce retired from Federal Service after 39 years and now enjoys spending her days with Tim serving Snellville with all manner of printing through their store, Print Magic Specialty Printing. “We finish each other’s sentences and know what the other is thinking,” says Joyce. “We have a great time here and have made so many friends through the business.” The pair joined several of those friends for a well-time Caribbean cruise to celebrate their NYE anniversary.

As with any sort of magic, you have to be open to all that it has to offer. Tim and Joyce found that the special sort of magic that happens between high school sweethearts is the kind that endures. “It really reflects the statement, ‘Never say never,’” says Tim. “It was so familiar, yet new.” Joyce agrees that the odds were not necessarily in their favor, but time did provide them with a happily-ever-after.