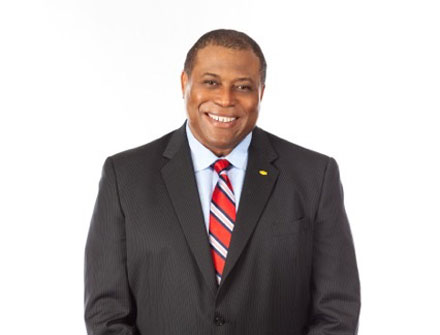 Donnell Thompson stands head and very broad shoulders above most people inside the Snellville Denny’s. It would stand to reason that most former NFL Defensive Ends would make an impression, but Donnell Thompson has a certain quality that not only makes him an imposing figure, but somewhat of a gentle giant.

He is the kind of employer who seeks to teach every moment and then let his students try their wings. His philosophy on how to run a restaurant as a coach has led to significant success for the recently rebranded Denny’s chain.

Poised to grow his investment, along with his partner Ron Wooten whom he met prior to their college days at UNC Chapel Hill and their NFL careers, Donnell Thompson has created and continually tweaks a game plan designed to bring jobs and growth to Atlanta through the Denny’s Brand. “Our stores are designed with the Heritage Brand look with new booth seating, pendant lights, and a total transformation from what people might expect from Denny’s,” says Thompson. “The sixty-year-old brand has a new look and we are proud to be investing in it for the long run.” 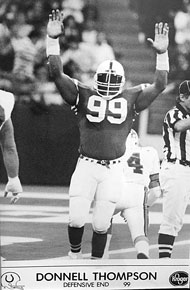 RIGHT: Number 99 Donnell Thompson played for the Colts in both Baltimore and Indianapolis.

The long run for Thompson and Wooten includes an additional two to three stores a year for a total of 17 in the Atlanta area. “We have just opened in Suwanee and have stores in Gainesville, Snellville , and Stockbridge with plans for Lithonia next,” says Thompson. “The people who work and eat here are what make the restaurant successful, I just provide the coaching, pay attention to the little things, and the big things tend to take care of themselves.”

As a kid growing up in Lumberton, NC, Thompson learned to value food, hard work, and football. “My parents both worked in a factory where they saved enough money to buy the family a house,” says Thompson. “We learned to do our homework, eat a PBJ sandwich and fruit on our own after school, and work hard.” In addition to his parents’ example, the young Donnell met a man who would forever cement the way he would treat his own employees. “I had a mentor who owned a factory, Mr. Robert Osterneck,” says Thompson. “I played for his youth football team and when I was 13 years old, I started working in his plant.” When Thompson was 15, he began helping in Osterneck’s office with payroll and also transported workers to and from the State Prison so they could come to work in the factory. “I learned to take a common sense approach with people from Mr. Osterneck,” says Thompson. “I use this approach today in most of what I do.  Mr. Osterneck insisted I go to college where I graduated from UNC-Chapel Hill to get a formal education, but I really learned from him how to deal with people.”

Dealing with people and coaching a large team means watching the whole field at one time. From a corner booth in Snellville, Donnell Thompson can relax with upbeat jazz playing over the sound system, his phone and laptop on his table and a sampler of the menu on his plate for quality control. He listens to his wait staff greet customers and serve their needs. He takes the time to show a young, new kid how a bathroom should be cleaned. And as he tastes each bite, his staff watch to see how he likes the food. “We employ close to 600 people,” says Thompson. “I feel a responsibility to their families, and they find their way into my daily prayers.” Thompson realizes that in order for the restaurants to succeed and sustain families, he and his employees have to love and respect people and possess a solid knowledge of the food industry.

With regard to customer service, Thompson provides an analogy comparing managing with being on the defensive line against Quarterback John Elway. “He was really good at getting you to go off sides,” says Thompson. “You have to prepare for the days when some of your people get drawn off sides whether is it in the food presentation, the condition of the bathrooms, or the way they treat customers.” Providing clear expectations while coaching throughout the week gives Denny’s employees the advantage for when things get busy and they are most likely to be drawn off sides. Because of the consistent coaching style, Donnell Thompson’s staff are more than prepared.