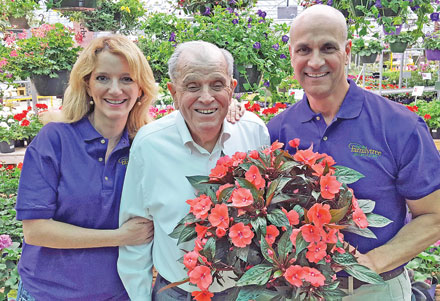 Snellville – After her family sold its landmark business, Pike Nurseries, a fixture in and around Atlanta for 50 years, in 2004, Dana Pike-Van Vlake found herself with plenty of time on her hands.

So she did what most people would do if they ever found themselves in the fortunate position of not having to work full-time.

She traveled, she became more active in her community, she focused on her family, husband Jeff, and their three growing children -- and she did what she knows best: she played in the dirt. 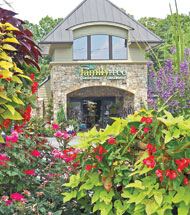 The five-acre site on Hwy. 78 at Grayson Parkway was intimately familiar to both father and daughter, because it was once home to one of the 26 Pike Nurseries that made up their then-multi-million-dollar enterprise. And for that reason – along with the fact that Snellville and the surrounding communities at the time was in need of a full-service garden center – Van Vlake was led back into what she knew best.

And thus, The Family Tree Garden Center was born.

“It just made sense,” she said. “There wasn’t a nursery out here and the people in these communities are so friendly. They needed a nursery again and they missed having a Pike’s here. So we decided to do it. It was like this property was waiting for us, like coming home.

“At that time, the housing bubble had burst and the economy was bad, but we believed in what we were doing and we really wanted to be part of the community.  We got a great deal on the property and started construction.  We do have the advantage of knowing the nursery business pretty well.”

Did they ever, especially Pete Pike, now 86 but still as active as he always has been.

“He could do this in his sleep, and he is so willing to help me learn,” Pike-Van Vlake jokes.

In 1958, Pike, fresh out of the military, took his dream of owning his own business, and what little money he and his wife had, and started Pike Nursery in a 200 ft. by 200 ft. location on Highway 41 in Marietta.

Over the next five decades, Pike Nurseries would become the premier plant and supplies destination for gardeners of all skill levels, as well as landscapers, designers and architects in Atlanta and Charlotte, N.C. In 2008, Pike sold his business to Armstrong Garden Centers, a California gardening chain.

But once dirt gets into your blood and under your finger nails, it’s virtually impossible to get it out.

The store’s motif has a homey, rustic feel with its irons fixtures and worn wood displays and shelves. It also houses the detailed and impressive Pete Pike Museum, which chronicles his life and accomplishments, with dozens of old photographs, Pike’s actual hand-written daily log books, his old desk (which he still uses) and stacks of composition notebooks filled with his legendary to-do lists.

“He is always big on making lists,” Pike-Van Vlake said of her dad, who can be found most days strolling around Family Garden Center, inspecting the premises and sharing his stories and expansive gardening knowledge with customers. “He still does to this very day. He’s always asking, ‘Did you make your list today?”

Along with offering a wide range of plant varieties, The Family Garden Center also helps its customers improve their gardening skills with how-to clinics for kids and gardeners of all experience levels. The store also offers landscape design services, and its expert staff stands ready to teach people how to be successful in their home landscapes.

Her staff, Pike-Van Vlake points out, is unmatched anywhere with regard to gardening knowledge, experience and company loyalty.

“A lot of the people working here I’ve known for 20, 30 years,” Pike-Van Vlake said. “They worked with us at our Pike stores, and when we opened here a lot of them came back. They’re really like family to us. It’s why it’s called The Family Tree. It’s about treating people with respect.

“It’s exciting to see them love their job, and this be their happy place when they come in. They also get to make decisions because it’s not cookie-cutter. We used to have 26 stores and they all had to look alike. Here, they can use their own creativity.  They’re able to develop relationships with vendors, too, so we can have so many different varieties of plants here that other people might not have.

“I hire people who are a lot smarter than me,” Pike-Van Vlake adds, “And they know what they’re doing. They do such a great job.”

That much is proven every day by the response of the community, which Pike-Van Vlake says “has been excellent.”

“People were so happy when we opened, so it was positive 100 percent all the way around. As soon as we opened, customers were lined up,” Pike-Van Vlake said. “Many of them we know by name and we always love to bring more people into our family of customers.

“When people come in here now, it’s like their therapy. They’ve always called it, ‘my happy place.’ It’s almost like, if something’s going on that’s not so great at home, they just come in and walk around and say, ‘This is my happy place. This is my therapy.’”

Playing in the dirt can have that effect on people.