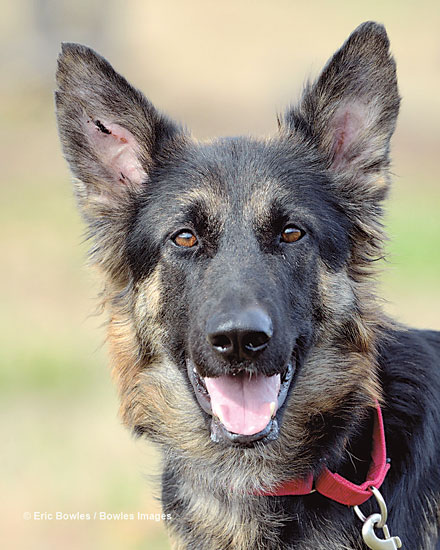 It’s a sad and serious problem, especially here in the South. County pet shelters (what we used to call “dog pounds”) are overrun with both cats and dogs who have been abused, neglected, confiscated or simply “turned in” by their owners.

The problem is a strange one, given how much we love our dogs down here. But the problem is also a multi-layered one, and we must change the way we think about our furry friends before the problems of overpopulation, overcrowded shelters and misunderstood breeds can be alleviated.

Left: Allie had chemical burns. CPR took her to RIVER, a place in TN, so she could have treatments in the hyperbaric chamber to heal her wounds and save her ear.

Why? Because it is humans’ responsibility to spay and neuter pets. For some reason, many pet owners in the South are reluctant to do that (this information comes from past research on dog rescue and adoption). The importance of spay/neuter is not news, though. There is about as much information out there on spaying and neutering as there is on not drinking and driving. There is no lack of education about the problem; there is simply a lack of responsibility on the humans’ part. “To my knowledge, not one cat or dog has ever walked into a vet clinic, produced a VISA card, and asked to be ‘fixed,’” quipped Kay Vergara, a member of a Labrador rescue group in Arkansas. According to Vergara, every Labrador Retriever pulled from an abusive home or shelter in her area is rehabilitated in the South, but the dog will always be re-homed in the northeast.

Surprisingly, there is yet another problem that accounts for dogs being surrendered (aka dumped) in shelters. Canine Pet Rescue (CPR) co-founder and Gwinnett State Court Judge Carla Brown knows all about that one. A long-time German Shepherd rescue volunteer, Brown knows the breed well. Almost without exception CPR, a 501(c) 3 all-volunteer organization, rescues German Shepherds from shelters, from homes, from pretty much any imaginable source. These regal animals are beautiful, expensive, highly intelligent dogs. So why are they being abandoned at a rate that even shelters can’t keep pace with?

“It’s simple. People don’t know that these dogs must be trained. They are large and highly intelligent. People get them as small puppies, but then they grow bigger. A German Shepherd is a working dog. He has to have a ‘job.’ If you don’t train him and show him what his job is, he’s going to come up with something on his own. Odds are, you won’t like what he chooses,” said Brown, adding that the shelter, for Shepherds, is akin to the Youth Detention Center for children. An extremely intelligent breed, German Shepherds need a leader, and they must be socialized.

“These dogs have strong prey drives. That can be a problem when young children and small dogs are around,” Brown said. “Training is critical; at the very least, they need basic obedience training. The lack of this training is why CPR saves between 80 and 100 German Shepherds a year.” That’s a lot of dogs to transport, vet, feed, house and train, and CPR mainly pulls dogs strictly from DeKalb, Fulton and Gwinnett counties. The problem statewide is staggering, and Georgia is only one state. Alabama’s and South Carolina’s statistics are similar to their sister state’s. Fortunately, those who work in any type of dog rescue are dedicated to their responsibilities; dog lovers from coast to coast help to get dogs from Point A to Point B when needed. Often, that type of help is the only hope a dog might have to be rehabilitated and ultimately, re-homed.

In recent months, CPR has even rescued German Shepherds from Doha, Qatar in the Middle East. “By doing that, we’re helping both the dogs and the American families living over there” Brown said.

“Here on the property (Brown’s Dacula farm), we have crates and kennels in every possible nook and cranny. We also have a handful of foster homes, and we could sure use more of them,” Brown said. In fact, CPR needs volunteers to exercise the dogs and play with them, feed them, transport them, clean kennels, even train the dogs if they’re qualified to do so. Both volunteers and foster homes must apply to CPR for the job, and home checks are done on foster homes. These steps are necessary in order to ensure that the German Shepherds are handled and trained properly, and cared for with kindness and humanity. And if time is in short supply, dog lovers who support CPR’s heroic works can simply donate through the organization’s website. 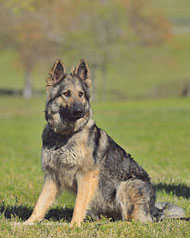 Right: Elsa is a female German Shepherd rescued from a home in Fulton County. Elsa had 6 puppies, was starved, and had a collar embedded in her neck when she was removed from the home.

“We have one major fundraiser every year, and that’s Bikes, Barks & BBQ. This year, the motorcycle ride begins at the farm in Dacula, goes to a designated place in Rutledge, GA, then back to the farm. Riders will be escorted by members of the Lawrenceville Police Department,” said Brown.  Registration for the ride begins at 8 a.m., Saturday, June 4; the ride commences at 9 a.m.

When riders get back to the farm, participants will enjoy a big barbecue, as well as shopping with several vendors on site. Dog demonstrations will be held,  always a fascinating testament to the strength and intelligence of the beautiful German Shepherd. “We’d like to add a 5K race to this event, but we need people working with us who are familiar with all that planning such an event requires,” Brown said.

No matter what talent a volunteer can offer, CPR can probably make great use of it. To volunteer to help with the dogs, or to help with Bikes, Barks & BBQ, email Carla@caninepetrescue.com. For more information about Canine Pet Rescue, visit www.caninepetrescue.com. Also, check out the Bikes, Barks & BBQ Facebook page. Fundraiser participants can ride in the Trey Phillips Memorial motorcycle ride, or come to the BBQ, or both on June 4!