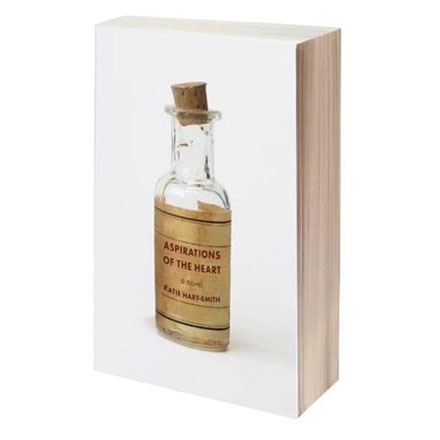 Lawrenceville – Katie Hart Smith loves history. She loves the city of Atlanta. And as a nurse, she loves medicine. But there’s more to this author than being a southern historian; there are lots of those to be found.

Smith comes from a long line of bright and independent women. All of these factors worked together in the creation of her newest book, Aspirations of the Heart.

Set to be published on June 1, Aspirations of the Heart is an historical fiction novel set in early 1900s Atlanta. The protagonist, Addie Engel, is a young North Georgia woman with aspirations of her own, and they do not include becoming an ordinary woman raising an ordinary family in rural Georgia. The rest of the book is fascinating, peppered with interesting facts about the South in a time of explosive growth. As most historical fiction authors confess, Smith enjoyed the research as much as she did the writing. “I was amazed by how limited the role of women was during that time period,” Smith said. “They couldn’t vote; they had no choices, really. A woman could choose from very few careers if she chose to have one at all: secretary, stenographer, teacher and sometimes, nurse.” 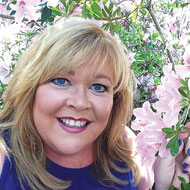 A stickler for authenticity in her writing, Smith spent months researching the setting for this book. From street names and neighborhoods in a very young Atlanta, to the use of nursing textbooks published during that time period, Smith got it right. “I’ve loved Atlanta since I was a little girl, when my daddy would play the organ on Sundays at The Shrine of the Immaculate Conception Church in Atlanta. We weren’t Catholic, but it was his job to play the organ at the church. I would even go with him during the week, playing in the church while he practiced. Our entire family went with him on Sundays, and each time we’d drive back home, he would take a different route, explaining along the way what we were seeing and telling us stories about the buildings and people.” It’s no wonder that Atlanta and her history are dear to Smith’s heart.

Something else that is an undeniable fact about a writer’s life: when the creative juices are flowing, the writer needs seclusion, peace and quiet. A common joke among writers is that when the muses are speaking, you stop everything to listen for tomorrow, they may go silent. It’s a joke, but as the saying goes, “Behind every joke is a truth.” 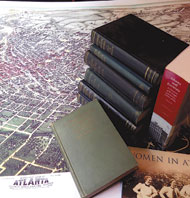 Right: Smith used a variety of resource materials to include an old Atlanta map, her grandmother's nursing textbooks, and historical books about Atlanta.

“You can’t control when the creative process wakes up,” said Smith. “I remember waking up at two o’clock in the morning, after months of toying with the idea of this book. I sat straight up in bed and realized that in a dream, all the pieces of the puzzle came together. (My husband) Jeff and I were in a hotel room on a weekend getaway. Still, I slid out of bed, got a pen and paper, and I wrote for two hours straight,” Smith laughed, adding that Jeff is her “rock and biggest cheerleader. He is so supportive.”

Jeff Smith serves as a captain on the Lawrenceville police force, commanding the Investigative Services bureau of the Lawrenceville Police Department. He is also a professor at Georgia Gwinnett College, and one of his hobbies is the study of genealogy. “He goes with me on my adventures, because he loves history too. It’s another way we get to spend really good time with each other,” Katie said of her husband.

Her husband may be her biggest supporter, but her grandmother was her inspiration. In fact, much of the story of Aspirations of the Heart mirrors her grandmother’s life. “She grew up in Indiana, and she wanted desperately to be a nurse. Her father, however, had different ideas. He saw his girls getting married, having kids, and raising a family. But she applied to Methodist Hospital to study nursing, and she was accepted. She and her mom sewed the nurse uniforms she’d need for school, secretly putting them away in a hope chest when her father would come home. Then one day, she was gone. Her mother told her father that she had moved away to go to school, and that one decision changed the course of her lineage,” Smith said. Becoming a nurse, Smith’s grandmother learned the value of education, the adventure of travel, and she passed those values on to her children.

“I felt like that story belonged to my grandmother, so I prayed about it,” said Smith, and the result is this fascinating new book.

Aspirations of the Heart is the first book in a series Smith plans to write. While the publication date is set for June 1, the launch party and public celebration will be put on ice for a few weeks. Smith had surgery in late May. “I have a great doctor, and I know that I am in the best hands,” Smith said in her typical optimistic tone. “I’ll be feeling better in no time, and then there’ll be no stopping me.”

Look for Smith in mid-July, when she will begin her publicity tour for the book, but in late May, the book became available for sale on Amazon, in bookstores, and at www.deedspublishing.com.