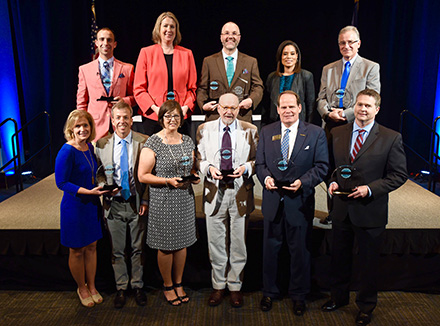 Gwinnett County (METRO ATLANTA) GA – May 10, 2017 – Designed to be reflective and unique to Gwinnett and across metro Atlanta, the Gwinnett Chamber honored more than 125 finalist organizations, across nearly 10 industry categories, on Wednesday, May 10, at the IMPACT Regional Business Awards, presented by Contemporary Marketing Group.

The awards luncheon, held at the Infinite Energy Forum, recognized leading organizations in critical industries that are driving economic development and job creation, while also enhancing our quality of life.

“The winners of the IMPACT Awards represent the creativity, determination, and engagement of our business community and are examples of the enormous contributions of Gwinnett and metro Atlanta businesses and their employees,” said Dr. Dan Kaufman, President & CEO of the Gwinnett Chamber.

Information Technology Award Winner Rocket IT received the 2017 Overall IMPACT Regional Business Award. This organization helps people thrive and that starts in its own office by developing its team members. Each full-time employee has an extensive 90- day onboarding plan. In addition to leadership opportunities in the community and the tech industry, employees are encouraged to explore learning events that interest them within their specific field. A performance-based profit sharing program ensures that every team member understands exactly how their specific efforts contribute to the profitability and success of the organization. Traditional IT support was built on a break/fix mindset. It was all about being able to react quickly when something went wrong and furiously scrambling to minimize the downtime. This is still important, but it’s not the whole story anymore. Organizations are more efficient when they’re focused on the view ahead of them rather than reacting to avoidable setbacks and the top talent this company produces can deliver that outcome. Its staff has grown by 75%, resulting in making the 2016 Inc. 5000 list and Channel Co.’s 2016 Fast Growth 150 list. It has also been named a Best Place to Work by the Atlanta Business Chronicle and Georgia Trend, among numerous other awards.

• AEC (architecture, engineering and construction) Award: Rosser In business in metro Atlanta for 70 years, this company is a small firm with a large presence, with global projects in Canada, Europe, the Middle East and Puerto Rico. On the local front, notable clients include the Coca-Cola Company, CNN, Delta Air Lines and the Infinite Energy Center. Civically engaged, employees participate in CANSTRUCTION, a competition aimed at increasing public awareness of hunger by assembling structures made entirely out of canned and boxed food, that once dismantled is donated to a community food bank, in addition to many other initiatives.

• Education Award: Georgia Campus – Philadelphia College of Osteopathic Medicine This institution has generated a significant economic impact of nearly $110 million annually. Data collated by the Georgia Board for Physician Workforce suggests that the college is providing exceptional service to the state in relation to the other four medical schools. This has taken a conscious effort and determination, as when established in Georgia, there were very few Doctors of Osteopathic Medicine, resulting in a lack of clinical rotation sites. That was overcome and educational requirements have been met in order to provide a clinical experience for students. Those same students have volunteered more than 9,000 hours already this year. All of this contributes to an increase of 35% in student body over the past few years.

• Healthcare Award: Kaiser Permanente One of the core culture attributes that drives this company and its employees is community engagement. For the past 10 years, it has invested more than $1.5 million to Gwinnett County-based nonprofits, which aligns with its mission to improve the health of the communities it serves. It has four primary medical locations with a new health contact center in Duluth which has created 1,000 new jobs, adding to the 3,000 employees in the metro region, which it has been part of for more than 30 years. At the forefront of innovation, it was one of the first and largest organizations in the industry to pioneer an electronic medical records system and all new office campuses are environmentally friendly as well.

• Hospitality Award: City of Suwanee Big. Bold. Game-changing. Those adjectives accurately describe the initiatives that this location has undertaken that have transformed it from just one more metro Atlanta bedroom community into a distinctive, desirable place to live and play. Home to nearly 50 events annually, its town center is where more than 200,000 visitors gather for entertainment. In addition to its reputation of ‘fan favorite’ among locals and tourists alike, it has garnered at least 10 awards from the Southeastern Festival & Events Association for happenings like Big Cheesy, Guess Who’s Coming to Cocktails and its 9/11 Commemorative occasion.

• International Award: Meggitt Training Systems This company is the world’s leader in virtual and live-fire small arms training systems. Through solid business development, it now has offices in Suwanee, Australia, Canada, the Netherlands, Orlando, Singapore, United Arab Emirates and in the United Kingdom, resulting in higher paying jobs for the metro Atlanta region. It was recently certified as the small arms program of record for both the U.S. Army and Marine Corps and is currently installing 1,500 units around the world. In addition, it provides virtual trainers for the Australian Defense Force, Canadian Armed Forces, the Italian Army, Singapore Army, United Kingdom Ministry of Defense and various other allied defense organizations.

• Nonprofit Award: Path Project This organization’s mission is to empower children growing up in suburban mobile home communities to find their path to high school graduation and God’s plan for their future through the power of education and positive relationships. It operates community centers whose residents are mostly first and second generation Latino immigrants and began by doing homework with three children in a mobile home park in Loganville. Soon after, more kids began to come and there were 40 children being served each week. A few months after beginning, there was a shooting in the community. This was almost the end of the program, but through perseverance they eventually bought and renovated the trailer where the shooting took place. Great things are happening in a community center that used to be a drug house. Through partnerships with businesses, churches, park owners and schools, it now offers after-school programs, college and career counseling, literacy education, mentoring and summer camps to more than 500 children.

• Service Industry Award: Frenik Marketing Group In 2013, this company was born out of a University of Georgia Entrepreneurship Program by a 20-year-old student. It has now evolved into a full-service marketing and public relations firm. With 93% of buying cycles beginning online, it helps brands adapt to the technology revolution, by developing consumer facing and back office tools, coupled with a creative strategy to ensure success. Its solutions and strategies have proven to provide exponential value, by growing companies from zero follows to millions and by developing software that can save companies millions of dollars by creating efficiencies. Innovation is in its DNA. From day one, the company knew it had to be innovative to cut expenses or it wouldn't be able to last in the market. It began with one employee, now celebrates continual revenue that grows 100% year over year.

• Small Business Award: AdEdge Water Technologies This business specializes in the design, manufacturing and supply of innovative water treatment solutions, by removing contaminants from drinking and industrial process water. It believes that everyone has the right to access clean, safe water. It has licensed two innovative biological filtration product lines as well as a line of containerized solutions for areas that cannot build a structure to house new water treatment equipment. It is also used in situations where a community must meet a tight timeline to get into compliance. The company is aggressively growing internationally with projects in Asia, Central America, India, Mexico and South America.