LAWRENCEVILLE – Wednesday evening, as Pomp and Circumstance filled the room, there were tears of joy as 76 of the state’s most recent GED® graduates processed into the Busbee Center Cisco Auditorium on Gwinnett Tech’s Lawrenceville campus to receive their certificates of recognition. Many have had to overcome great obstacles and hardships to get to this moment. Many have waited years to finally don the coveted cap and gown and walk across the commencement stage.

Daisha Lewis is one of those students. In 2003, at the age of 14, Daisha was diagnosed with a rare, life-threatening eye cancer that caused her to have to withdraw from Shiloh High School and seek treatment out of state. She tried hard to keep up with her studies via homeschool courses but was not able to fulfill all of the graduation requirements to be able to walk with her class. Daisha tells, “It was devastating! I had worked so hard to not only fight for my life, but to be able to graduate. I had been accepted into UC Berkeley. It broke my heart when I got the news that I could not walk with my class.” 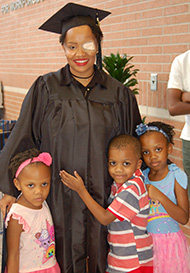 After high school she pressed on with life, working and starting a family. The cancer kept recurring but she kept fighting. After having three children, Daisha said they were her reason to want to get her GED®. She wanted to set the example that education was important and that you should never give up. Daisha says, “I want them to know that no matter what happens to you in life, if you have breath in your body, you have to try.”

Pictured left: Daisha Lewis proudly shows off her GED certificate while flanked by her children, friends and family that have been there to support and encourage her every step of the way.

In October of 2012 Daisha set out to try again. She launched into her GED® studies at Gwinnett Techwith great drive and determination. Wednesday night she finally got her moment on stage. After 11 years, she can finally put high school behind her. When asked what comes next Daisha smiled big and said, “I’ve been accepted into Berkeley again and will start online courses June 26th. I plan to get my Bachelor’s Degree in Interdisciplinary Studies from Berkeley. I’ve also been accepted into the Atlanta Institute of Music & Media, so I want to pursue courses there as well. My dream is to teach music and art to children in impoverished areas.” Daisha tells how many people helped, encouraged and supported her along her journey. She says, “I want to pay it forward now. If my testimony and this giant eye patch can help someone else, I’m all for it.”

Darlene Driscoll, 31, graduated as her husband, baby girl, mother and judge stood proudly alongside her. Driscoll was kicked out of school in the 7th grade. She left home and fell into a life of drugs and toxic relationships. Her life spun out of control for many years. She got in trouble with the law and ultimately found herself in Gwinnett County’s drug court. That’s where she met Judge Kathy Schrader and began to turn her life around.

With a 6th grade education, Judge Schrader knew that for Driscoll to turn her life around, her recovery and remediation plan had to include getting her GED®. She connected Driscoll to Gwinnett Tech and began to mentor her. Driscoll shares, “Judge Schrader believed in me in ways I didn’t believe in myself. She believed I could do it, when I was certain I couldn’t. She pushed me and showed me I could.” And as Darlene crossed that stage, Judge Schrader was there cheering loud. Driscoll said that many people her age think it’s too late. She said, “I am living proof it’s never too late.” 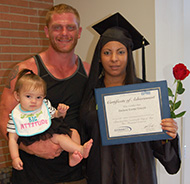 Each GED® graduate sitting in the auditorium Wednesday night has a story to tell. Each of their lives took them down a non-traditional path to finish their high school degree but they never gave up.

Pictured right: Darlene Driscoll stands with her husband and daughter as she proudly shows off her GED certificate.

Lauren Beavin, the GED graduate speaker, told her story of suffering a concussion while cheerleading at Norcross High School her freshman year. That concussion left her struggling with symptoms that became debilitating. Because the school could not accommodate Lauren’s severe symptoms she felt she had no other option but to drop out. Her mom agreed as long as she would continue to pursue her education another way. Eventually Lauren found Gwinnett Tech’s GED® program. As Lauren addressed the crowd she told how her instructors taught her “Never stop. You always have options.” Lauren sent out a message to the faculty and staff saying, “Thank you. You and this program saved me.” Then Lauren turned to her fellow graduates and said, “Congratulations, you made it. You passed. You beat the odds. I’m very excited for all of us and what our futures hold.”

Dr. D. Glen Cannon, President of Gwinnett Tech said to the graduates, “Take time tonight tocongratulate yourselves Tomorrow you can start the rest of your lives. You’ve done a great thing. New doors of opportunity are open to you today that weren’t open to you yesterday. The world is yours. It’s now up to you what you do with it.” 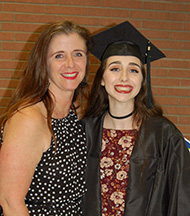 Karen Kirchler, Vice President for Adult Education at West Georgia Technical College and the 2016 National Adult Education Program Administrator of the Year, gave the keynote address. Kirchler shared inspiring words of encouragement to the students saying, “You each made a conscious decision to do this and you did. Now I challenge you to do more – be more – have more. If you did it now, you can do it again and again and again. We need you to go out there in the world and do great things.”

Rebecca Alexander, Vice President of Academic Affairs closed the evening saying, “Education is a gift that has the power to transform your lives. Never stop learning. This diplomas is just the first step.” According to Stephanie Rooks, Gwinnett Tech’s Dean of Adult Education, many of the GED®-earners have already accepted that challenge. Rooks reports, “96 from this class alone have already enrolled at Gwinnett Tech to further their education. They’re just getting started.”

Between July 1, 2016 and May 4, 2017, Gwinnett Tech has helped more than 700 people earn their GED®. Rooks says, “That’s a most encouraging number! Our department is committed to our students. We don’t want them to just get their GED®. We’re committed to providing them with the skills, resources, training and guidance needed to advance into college or a career.” Rooks continues, "We meet our students where they are and help them push forward with their lives and chart a new course for success.”

Gwinnett Tech’s Adult Education department offers one of the best GED® programs in Georgia. In 2016 the College had the most GED® graduates in the state and the program received recognition as the 2016 GED® Examiners of the Year, the GED® Testing Center of the Year and the Golden GED® Graduate of the Year.

Gwinnett Tech’s Adult Education department serves approximately 2,100 GED® prep students each year. The College offers five adult education centers in Gwinnett (including partnerships with Gwinnett County Sheriff’s Department, Gwinnett County Public Schools and Gwinnett Juvenile Court) and two centers in North Fulton, as well as four GED® Testing Centers. Orientation, assessments and classes are offered to students for free. The cost to take the GED test is just $40 per subject area. Residents of Georgia who earn a GED may also be eligible for a $500 HOPE GED grant, which can be used toward continuing postsecondary education in Georgia. To learn more about the GED® program at Gwinnett Tech, visit GwinnettTech.edu/ged or call 678-226-6702.