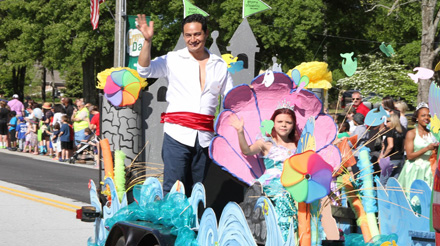 GRAYSON – The 36th Annual Grayson Day on Saturday, April 25th, will be a day of remembering and celebrating our heroes – both big and small - those who have fought for our rights and dignity, stood as role models in our lives, and those who give of themselves to make a difference in our community. We’re dedicating the day to celebrating all the heroes among us! 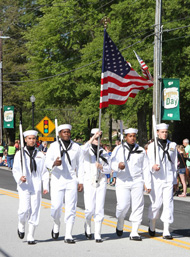 Each year, Grayson celebrates Spring with the Grayson Day Parade and Festival. Last year more than 200 vendors brought their arts, crafts, food, music, and enterprises to Grayson Community Park and more than 5,000 people enjoyed their warm welcome to the City of Grayson. This year is expected to be bigger than ever, according to City Administrator Laura Cone and Mayor Allison Wilkerson, who have coordinated the event for the last 12 years.

“All of our food spots were filled in early February,” said Cone. “Our vendor spots are filling up quickly.” Last year, the festival grew to the point that the site was expanded to accommodate a larger children’s play area and more vendors.

The Grayson Day Parade steps off at 10:00 a.m. with the theme “A Celebration of Heroes.”

“We would like for parade participants to create floats that honor those in our midst who are heroes in their efforts on behalf of others,” said Mayor Wilkerson. “We want to recognize and celebrate the efforts of servicemen and women, policemen, firemen, teachers, mentors, and those who work tirelessly to make this world a better place. What may appear to be a small act of selflessness to some may be an act of heroism in the eyes of others.”

In a tradition started in 2014 with “Make-A-Wish,” the City of Grayson will use the Grayson Day Festival as a platform to raise funds and awareness for a non-profit cause that affects those in our community. This year’s recipient is the SE Gwinnett Co-op Ministry, which helps those in need in our community and is an active part of Grayson’s community since moving here in 2014. “We’re very excited to be able to continue to bring awareness to the Co-Op and provide whatever we can to help sustain its good works,” said Wilkerson.

Laura Drake, Director at the SE Gwinnett Co-op, will be the 2015 Grand Marshall. “She is definitely one of the most heroic people I’ve met,” said Wilkerson. And of course, there will be the Co-Op Float, built by Snellville Council Members and volunteers in honor of the Co-Op and Grayson’s win in the Give Hunger the Boot Challenge in January.

In keeping with our heroic theme, Grayson welcomes visitors to the park for the first of the 2015 Movies in the Park that evening with Big Hero 6. Movie begins at dusk.

It’s going to be a day of celebration and fellowship … and a great day to Get Into Grayson!