A birthday, an intersection dedication, an inspiration 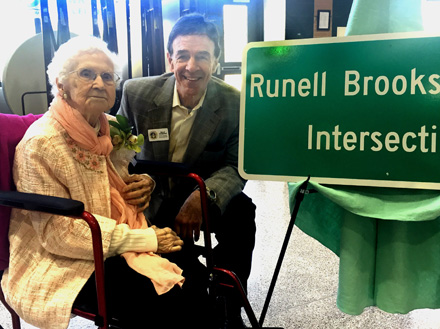 From 1818, when it was chartered, until the 1960s, Gwinnett County was just one of Georgia’s many slow-growing rural areas. But as the county’s attractiveness became more widely known, its complexion began to change.

And since the 1980s, when it was the fastest growing county in the United States, “Gwinnett County” has become synonymous with change. From a largely agricultural exurb, a world away from Atlanta, Gwinnett County has been transformed into a suburban hub of residential, commercial and industrial activity.

While many of us have observed a host of changes during the past 30, 40, 50 or 60 years, it’s a safe bet that no one has witnessed more transformation than Mrs. Runnell (Nell) Brooks Foster.

For the past 85 years, Mrs. Foster has lived in the rock house at the corner of Highway 78 and Rosebud Road. The Fosters’ store that was across the street was torn down some time ago, but the rock house on the southwest corner of the intersection still serves as Mrs. Foster’s home, and has become a landmark for the hundreds of travelers who pass by daily. Ironically, at the time she and her husband Clyde moved in, what is now Highway 78 was a lightly traveled dirt road, and the route from Athens to Atlanta took travelers through Snellville by way of Grayson.

Road travel east of Snellville was improved dramatically in 1938, when Highway 78 became a two-lane paved road. Unfortunately, the grade at the Rosebud Road intersection created a blind spot that made it the site of frequent accidents. It wasn’t until 1983, when Highway 78 was widened to four lanes, that the grade was reduced and the rash of accidents was eliminated.

The history of the Highway 78/Rosebud Road intersection is of particular note, because it was recently named the “Runnell Brooks Foster Intersection”. On March 28th, friends, family and local elected officials assembled for a ceremony to celebrate the intersection dedication. The celebration also included a birthday party. On March 27th, Mrs. Foster turned 109.

Organized by Loganville mayor Dan Curry and Grayson mayor Allison Wilkerson, the ceremony, held at Grayson High School, brought a number of Mrs. Foster’s relatives to the microphone. Each one had a heart-warming story about Mrs. Foster and the impact she had on their lives.

Like her rock house, Mrs. Foster has also been a “landmark”. Until just a few years ago, travelers on Highway 78 would regularly see her tending to her vegetable garden, located just to the west of her house. According to a number of people, that garden produced the best Silver Queen corn around.

Mrs. Foster’s longevity isn’t the only noteworthy aspect of her life. She is also well-known for her commitment to helping others. From feeding people during the Depression, to inviting people with emergencies to use her phone (when it was the only one in the area) to driving people to church, Mrs. Foster was always eager to lend a hand.

The example she has set has surely been an inspiration to people in the area. Although times have changed dramatically since Highway 78 was a dirt road, one thing that has remained consistent is the willingness of people to follow in Mrs. Foster’s by helping others. Maybe that’s the secret to such a long life.

(This isn’t the first time Mrs. Foster has made headlines. Much of the information in the paragraphs above was derived from an article written by Mrs. Foster’s nephew David Allen, which appeared in the March, 1995 issue of The Snellville Citizen.)