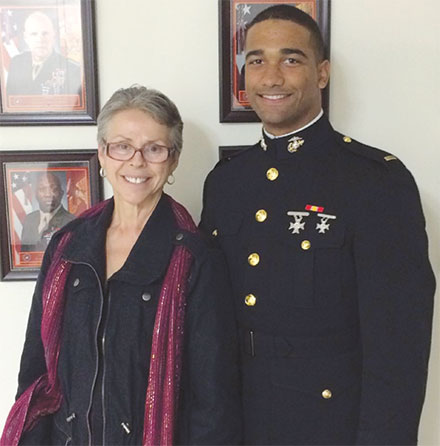 I usually try to make these columns a little humorous. After all, our lives have enough bad stuff, why not laugh as much as you can.

Today, I am afraid is not going to be so funny. Earlier this morning, I had an email from an old college friend. He was talking about mortality and the stresses of life.

I commiserated with him. We continued to write and laugh about stupid things from college and sending each other undying love and devotion. And swearing to secrecy the things that shall not be acknowledged to others. Then I got an email from Deborah Leach Hicks with a Facebook note from Parker Jordan.

After Parker’s note, I was flooded with emails from various people who worked with Eleni and had watched Parker grow up. The more notes about her and their endearments of her I received, the more I knew I had to write this.

All of us were close and felt that Parker belonged to all of us. I retired while he was still in elementary school, but I got regular updates on him from his Mom. Parker knew us all. Some people kept special “Parker treats” hidden in their desks. He had his rout of visiting with everyone. When he would run down the halls after he got out of school you would just see spindly arms and legs in a whirl. Actually, he reminded me of a whirly-gig, now that I think about it. We all loved that boy.

Eleni adored him. She adopted him and raised him as a single parent from the time he was a little fellow. She did a good job, too. Everyone will tell you so.
That little whirly-gig is now a grown man. He has completed his training and education at the U.S. Naval Academy and is a Marine fighter pilot. Eleni was so proud of him and so scared for him, but she raised him to be a strong man.

Eleni was a strong woman. She and her family came to this country from Greece when she was young. She spoke with a beautiful soft accent. You didn’t always catch it, but it was there. Her “Hey Y’all” was uniquely her voice.

Eleni taught many students Chemistry through her years at Parkview. She was a great teacher. She was a better friend.

After her retirement, she started working with the local Humane Society, helping to foster animals and working in various capacities.

Eleni and I talked or emailed regularly. Once we were at our regular PHS luncheon and she showed me a picture of a tiny little kitten that she had taken in. Her neighbor had found it half starved, drinking out of oily water puddles in the parking lot of an industrial park. Eleni brought this little kitten into her household of older cats and dogs. She got that little bitty thing healthy and was looking for a home. Eleni had counseled me during my worst grieving period after losing my little black and white cat, Ramona, to a brain injury from inhaling a bot fly. We had talked numerous times during the period Ramona was ill. One of my best friends, Ron Smith, another teacher at Parkview, had died. My mother had died and I was in treatment for cancer. I got an email almost every day from Eleni. Just a “thinking of you kind of thing.” That was Eleni.

I think she knew I needed that stranded little black and white kitten more than anyone else in the world. James had brought home two flying monkeys that looked like kittens, but actually were machines of destruction. That little kitten of Eleni’s needed protection and love to finish bringing her back to good health. She and Parker met us and we took Gracie home. I thanked her repeatedly for letting me have little Gracie.

The Parkview High School retirees met for lunch the last week of February. Eleni had sent me a note that she couldn’t come. She rarely missed one of our luncheons, but she and her brothers were going on a Caribbean cruise, leaving that day. Eleni was really looking forward to the time with her family. We talked about her at lunch and we knew she was going to have a ball. The cruise ship wouldn’t know what had hit them.

Eleni Jordan, you made a difference in the lives of many people and many animals. You certainly were loved and you will be missed. Heaven surely will have lots of animals for you to care for. Your angel wings are being fitted to you today and I know you will be riding on Parker’s left shoulder, bringing him love and protection.