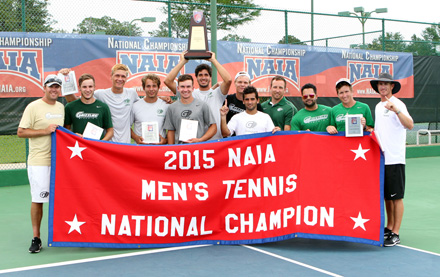 The Georgia Gwinnett College men’s tennis team spent the entire regular season as the undisputed No. 1 team in the country, and the Grizzlies will end the season that way too as they beat Embry-Riddle 5-0 to win a second consecutive NAIA National Championship at Mobile Tennis Center on Sunday.

“The men dominated from start to finish this week,” GGC Head Coach Chase Hodges said. “We were the best team here, and we really proved it. I’m really proud of the guys, and I have an extreme amount of confidence in their abilities. It’s hard to win when you have a target on your back all season, but the guys did it. They really stepped up this whole year.”

The match came after more than a day of delays, but it didn’t seem to faze the Grizzlies, who won all four matches in the national championship by a 5-0 scoreline. The team is just the second-ever to make it through the entire national tournament without surrendering an individual match, joining the 2006 team from Auburn-Montgomery. GGC is also the first to win back-to-back crowns since AUM won three in a row from 2006-08.

Once again, the Grizzlies established their dominance in the early goings as they racked up three victories in doubles. The Australian tandem of Lachlan McPhee and Luke Morland got it started with an 8-2 win over Rodolfo Arreygue and Miguel Lopez Gomez. Jordan Cox and Kevin Konfederak kept the momentum rolling by unseating the fourth-ranked duo of Deni Zmak and Jaime Sanchez-Canamares Rios in 8-6 fashion. Matias Hatem and Connor Clements closed out the round with an 8-4 victory over Fabian Zierlyn and Carlos Becke.

“I’m really proud of how we played in doubles,” Hodges said. “We changed the teams around late in the season, and despite them not playing that much with each other, we felt good about it. Those three combinations can take on anybody in the country, and you can just look at their results this week to see that.”

In singles, GGC won the opening set on four of six courts, but it was Clements who picked up the first victory, beating Becke 6-2, 6-2 at No. 4 to put the Green and Gray a point away. Hatem, who was playing right next to him at No. 3, sealed the deal with a 6-1, 6-3 decision against Zierlyn.

“That was an unforgettable moment for me,” Hatem said. “I was trying not to think about what was going on with the other courts, and I just wanted to get the point. I knew that I wasn’t playing my best tennis before today, but I was going to come out and do whatever I could to get the win for the team today.”

Clements finished the tournament as the only Grizzly to register a singles win in all four matches, including the clinching victory in each of the first three.

“Connor just does not lose here,” Hodges said. “When we come down to Mobile, he is a beast. He played on another level this whole week. He’s brought his A-game every time we’ve played here, and I’m really proud of him. He’s a great player.”

GGC, which now owns an 8-0 all-time record in NAIA Championship matches, finishes its second year of postseason eligibility with a 16-2 record and a 9-0 mark against NAIA competition, blanking all nine.

Georgia Gwinnett College is a four-year, accredited liberal arts college that provides access to targeted baccalaureate level degrees that meet the economic development needs of the growing and diverse population of Gwinnett County and the northeast Atlanta metropolitan region. GGC opened its doors in August 2006 as the nation’s first four-year public college founded in the 21st century, and the first four-year public college founded in Georgia in more than 100 years. Georgia Gwinnett produces contributing citizens and future leaders for Georgia and the nation. Its graduates are inspired to contribute to their local, state, national and international communities and are prepared to anticipate and respond effectively to an uncertain and changing world. Visit Georgia Gwinnett College’s Web site at www.ggc.edu