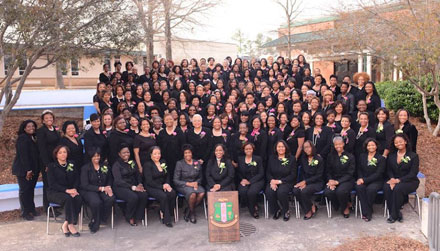 Members to Participate in MLK Day of Service and Action;
Public Encouraged To Lend a Hand and Seasonal Wrap

Lawrenceville, GA – The members of Upsilon Alpha Omega Chapter (“UAO”) of Alpha Kappa Alpha Sorority, Incorporated (“AKA”) are no strangers to volunteerism and community service. Chartered in January 1994, UAO members provided over 7000 community service hours to Gwinnett County and beyond in 2014.

The New Year finds members still in a “community service state of mind” and planning to further impact the Gwinnett County community through a number of volunteer activities on Monday, January 19. Clad in their beloved colors of salmon pink and apple green, chapter members will lend their time and talent to five different organizations by participating in a roadside clean-up in Lawrenceville, volunteering at the Norcross, Lilburn, and North Gwinnett Co-Ops, and performing duties for the Gwinnett Children’s Shelter.

Upsilon Alpha Omega Chapter President, Karan Rhodes said, “Winston Churchill once said, ‘We make a living by what we get, but we make a life by what we give.’ I can personally attest to and am so proud of the fact that the members of UAO truly demonstrate the pride of giving via their ongoing commitment of life-long service to enrich the lives of the underserved in the metro-Gwinnett community and beyond.”

But UAO’s day of service and action doesn’t begin with the service activities mentioned thus far. In fact, it begins with parades – and a drive. Chapter members will honor the memory of the late Rev. Dr. Martin Luther King, Jr. by marching in community parades slated for Lawrenceville and Snellville, and also conduct a community-wide winter seasonal wrap donation drive.

Community support is needed to make the drive a success. The public is being encouraged to bring coats, gloves, scarfs and hats to donate in support of the Veterans Empowerment Organization to assist homeless veterans. Collection sites for the seasonal wraps include: ·

“On January 19 over 975 graduate and undergraduate chapters of Alpha Kappa Alpha Sorority, Incorporated will serve our communities as a part of our AKA Community Impact Day,” said Upsilon Alpha Omega Chapter Vice President, Andria S. Daniels. “Alpha Kappa Alpha Sorority, Incorporated will make an impact around the world and touch the lives of thousands.”

The first Greek-lettered organization primarily for college-educated African-American woman in Gwinnett County, UAO is a powerhouse of volunteerism and caveat for positive change. Chapter members look forward to many, many more years of providing service to Gwinnett County and beyond. Forever and a day, the sisters of UAO will Serve All Mankind for AKA!

About Upsilon Alpha Omega Chapter On January 29, 1994, thirty aspiring professional women chartered the Upsilon Alpha Omega Chapter in Lawrenceville, Georgia. The group gathered to implement and support the international programs of Alpha Kappa Alpha Sorority, Incorporated as they pertain to the needs of Gwinnett County, Georgia. Today, Upsilon Alpha Omega, the first African-American Greek-letter organization in Gwinnett County is over 270 members strong, and has made a significant impact on the community. Karan Rhodes serves as President. Andria S. Daniels serves as Vice President. http://www.upsilonalphaomega.com , #AKAinGWINNETT #uaoturns20