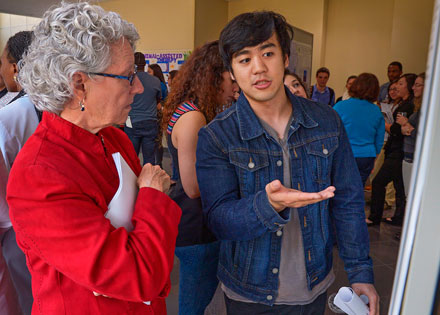 According to senior college students participating in the 2014 National Survey of Student Engagement (NSSE), Georgia Gwinnett College’s innovative approach to higher education not only works, it outperforms many other institutions across both the state and nation.

NSSE annually surveys students across the country to measure how well colleges and universities perform in several areas that nurture student engagement, a critical predictor of student success. According to NSSE, survey items on The College Student Report “represent empirically confirmed good practices in undergraduate education.”

“It is a known fact that engaged students do better in college,” said Dr. Lois C. Richardson, interim senior vice president for Academic and Student Affairs and provost. “They stay in school, progress toward their degrees and graduate at higher rates than students who are not engaged.”

GGG’s fall 2014 student retention rate of 68.2 percent is unusually high for an access institution, and indicative of the college’s success at engaging its students.

“These outstanding results indicate that GGC’s model for student success works,” said Dr. Stas Preczewski, president. “Across the country, a lot of students go to college but many of them do not succeed and graduate. The most effective way to change this pattern is to improve student engagement. GGC’s model was designed specifically to accomplish this, leading to greater student success.”

“This creates a cycle of success through which the college is rewarded with increased resources for doing its job well. Those resources are then reinvested in ways that further enhance student engagement and success,” Preczewski said. “This model is self-sustaining and perpetuating.”

The first column of the chart above indicates how GGC seniors scored the college on all student engagement indicators in the 2014 NSSE report. Georgia Gwinnett average scores outperformed the average composite scores of participating University System of Georgia institutions in every indicator, as seen in a comparison between the first two columns.

“Because of our emphasis on student engagement and student success, NSSE is exactly the evaluation tool in which we want to excel,” said Richardson. “Georgia Gwinnett’s outstanding performance is a testament not only to the college’s innovative approach to higher education, but to the dedication of our faculty to our students and to the college’s mission and vision.”