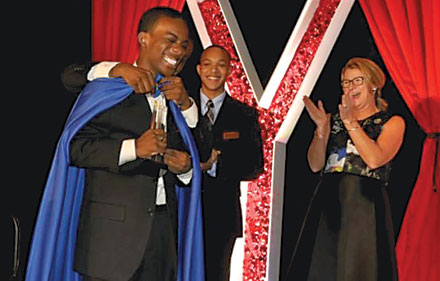 "Born to Inspire. Live to Inspire.” These are the words Brian Ball – Boys & Girls Clubs of Metro Atlanta’s 2015/2016 Youth of the Year – lives and breathes by.

He believes we all have the power to change the world….we just need to believe it.

Surrounded by a host of “superheroes” in his life, including his mother, teachers, and Boys & Girls Club mentors, Brian shares, “It was at the Club that I discovered my superpower - the power to change a life. I learned my power was a gift and the best way for it to remain one was to keep giving it.”

At just 17 years old, Brian has already shared his gift with so many. President of Lawrenceville Boys & Girls Club’s Keystone Club, a service and leadership group for teens ages 14-18, Brian uses his passion for photography, poetry, and videography to shine a light on key social issues facing kids today. To date, he has worked on campaigns combatting bullying, preventing teen suicide, and promoting the power of positivity. His most recent outreach “Turn it Off” encourages kids and teens to connect to each other and their communities on a personal level. 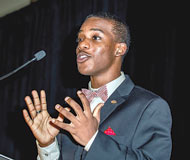 In addition to driving social change, Brian has also made huge strides in his academic career. When he started at a new charter school in ninth grade, Brian was overwhelmed by the rigorous course load and new expectations. His Club staff noticed him struggling and offered him tutoring and hands-on support. They encouraged him to enroll in College Bound, a program that prepares teens for ACT and SAT tests, helps them secure scholarships, and gives them trainings about what to expect when they get on campus. Now, Brian is enrolled in six AP classes including biology, calculus, economics, environmental science, language, and art. He has a plan for the future.

Even though he has a solid plan now, Brian wasn’t always on this path. He understands that, in the journey of life, not everyone starts from the same place. In fact, his family has had many hurdles. Brian grew up with a single mom, struggled financially, and even faced homelessness.  “We are all dealt a deck of cards in life and it’s our choice on how we play them. For people that have an unfair hand, I want them to know that they can make it, no matter what. Honestly, I want to give people what my mother and my family never got.”

A natural born leader, Brian devotes much of his charisma, intellect, and passion toward helping others. In the past couple of years, he has volunteered more than 500 hours of time at his Club, mentoring peers and younger members. He serves as a L.I.N.K. (Leader in Nature’s Kingdom) instructor at Camp Kiwanis, Boys & Girls Clubs of Metro Atlanta’s 160-acre outdoor residence camp, where he works to connect kids from Boys & Girls Clubs across the city to nature and build skills like problem solving, communication, and trust.

During his last day at Camp a few years back, he was searching for another camper who had gone missing and found him crying under his bunk. Usually a tough guy and a rebel, Brian was surprised to see this camper so distraught. The camper explained, “I don’t want to leave. I want to stay here. I love you guys.” It was at that moment that Brian realized what an impact he could have …what power individuals have to shape others and the world.

As the saying goes, with great power comes great responsibility. Brian shares, “I believe my purpose in life is to connect, inspire, and awaken my generation to the world around us.” An inspiration to youth and adults alike, Brian is just starting his journey to make the world a better place.

Brian will graduate from the Gwinnett School of Mathematics, Science, and Technology in May 2016. He hopes to attend the University of Wisconsin-Madison and major in film production. His work will focus on bringing positive change to the world.  “I believe if we build each other up, we will all reach new heights.”