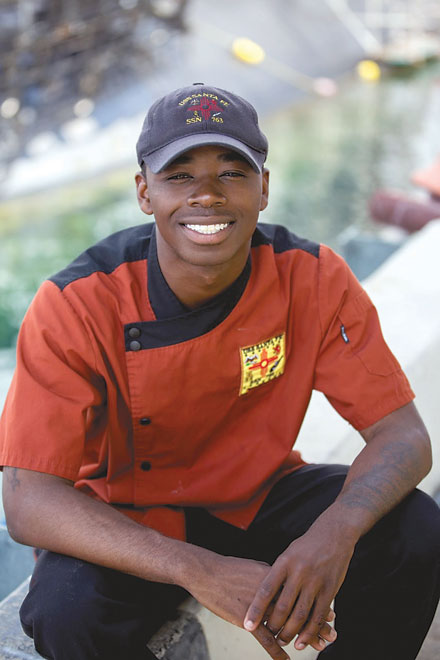 Pearl Harbor - A 2014 Central Gwinnett High School graduate and Gwinnett County, Georgia native is serving in the U.S. Navy as part of a crew working aboard one of the world’s most advanced nuclear-powered fast attack submarines, USS Santa Fe.

Seaman Apprentice Joshua Carlton is a culinary specialist serving aboard the Pearl Harbor-based submarine, one of 40 Los Angeles-class submarines making it the backbone of the submarine force.

The Navy culinary specialist is responsible for food service aboard the submarine.

“As a culinary specialist, I take pride in playing a big role in crew morale,” said Carlton.

With a crew of 130, this submarine is 360 feet long and weighs approximately 6,900 tons. A nuclear-powered propulsion system helps push the submarine through the water at more than 25 mph.

Attack submarines are designed to hunt down and destroy enemy submarines and surface ships; strike targets ashore with cruise missiles; carry and deliver Navy SEALs; carry out intelligence, surveillance, and reconnaissance missions; and engage in mine warfare. Their primary tactical advantage is stealth, operating undetected under the sea for long periods of time.

According to Navy officials, because of the demanding environment aboard submarines, personnel are accepted only after rigorous testing and observation. Submariners are some of the most highly trained and skilled people in the Navy. The training is highly technical and each crew has to be able to operate, maintain, and repair every system or piece of equipment on board.  Regardless of their specialty, everyone also has to learn how everything on the ship works and how to respond in emergencies to become “qualified in submarines” and earn the right to wear the coveted gold or silver dolphins on their uniform.

“This is a once-in-a-lifetime crew,” said Carlton. “I can’t say enough about how hard everyone works on this boat. It’s inspiring.”

“In the Navy, I am given the opportunity daily to protect my family, home and country,” added Carlton. “It’s something that I am very grateful for.”

"Why Being There Matters"

On our planet, more than 70 percent of which is covered by water, being there means having the ability to act from the sea. The Navy is uniquely positioned to be there; the world's oceans give the Navy the power to protect America's interests anywhere, and at any time. Your Navy protects and defends America on the world's oceans. Navy ships, submarines, aircraft and, most importantly, tens of thousands of America's finest young men and women are deployed around the world doing just that. They are there now. They will be there when we are sleeping tonight. They will be there every Saturday, Sunday and holiday this year. They are there around the clock, far from our shores, defending America at all times.