When Hell froze over 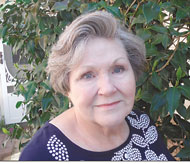 Hey Y'all
When Hell froze over
By Marlene Ratledge Buchanen

We have had such beautiful spring weather recently. The temperatures have been in the 70’s and low 80’s. The pollen count has been in the thousands.

We have had just enough light rain to wash some of the pollen out and allow the beautiful colors to shine through.

We had a significant drop in the temperatures today.  The high has hovered around 61 degrees and below. “So, it’s spring” you say.  “The temperatures do vary oddly at this time of year”.  HA.  This isn’t the cause.  Hell froze over.

Every time we have significant drops in the temperature it is because Hell is beginning to freeze over. Women the world over tell themselves they are free of certain terrible experiences, such as panty hose.  Then something happens.  They are forced into a dress and panty hose.  Temperatures start to drop because she said at one time, “Hell will freeze over before I ever to do this again.”

Today was my day. I controlled the temperatures of Hell.  I had esophageal repair surgery and as a result have lost something like 40 pounds.  I have only bought a few new clothes because my weight keeps changing.  One thing I had not bought was a nice pair of “funeral britches.”

I was raised to dress and look your best. Even if your clothes are not expensive, you better be clean, neat and dressed appropriately.   Mama always left for work dressed to the nines.  She was so happy when Jackie Kennedy introduced the pants suit and it became an acceptable clothing choice for all occasions. Mama told me not to wear black or a dress with panty hose to her funeral and, “For God’s sake, don’t put me in a dress or hose.  I am going free through the gates of heaven.”  (For her funeral, Mama wore pink socks with butterflies, white pants and a pink blouse. I knew she had meant what she said and she would haunt me if I did not respect her final wishes.)

When I retired from Parkview High school in 2002, I swore I would never wear a dress or panty hose ever again.  I tried on every nice pair of pants I had.  My standard funeral suit pants fell to my ankles while I was wearing them.  I was desperate.  I ran to my storage closets upstairs thinking there had to be something. There was….

A black sheathe dress with a dark purple pattern on it hung forlornly in the closet.  I heaved it over my head and it hung on my body.  I grabbed a black sweater to help with the camouflage of my upper arms.  My upper arms have not seen the light of day since I was 32 and a size 12.  I looked like a bag lady in clothes made for someone three sizes larger, but I was covered up.

The next step was shoes and stockings.  The dress had a slit.  I couldn’t get by with knee highs.  I haven’t bought panty hose in 14 years.  I was throwing knee high stockings all over the bed and I spied one long panty hose leg AND it was black.  I struggled to pull them on.  At one point I got my left leg in the right foot and nearly flipped myself out the window. I managed to pull those suckers on.  For those of you who have never worn panty hose, “Suckers” is the right word.  They suck you in on the bottom half and puff you out on the top. The industrial strength elastic in those panty hose was still sucking!!!  Fourteen years and the elastic was still good.  I had been expecting to have to resort to duct tape and staples.

I pulled on my little heels and looked in the mirror.  EEK.  The best I could say was that I  was wearing clothes.  I wouldn’t be upset if my husband didn’t sit with me and the rest of his family didn’t acknowledge my presence.

People were nice, I think.  Many commented “I understand you have been sick.” Or “Have you been ill?” I loved the dear little old lady who looked at me and said, “Honey, I had that same dress some twenty years ago.  It doesn’t look real good on you either. “

I must have looked worse than the gal in the box and the temperature had dropped to 58.