Remembering Rodney Camren, the heart of it all 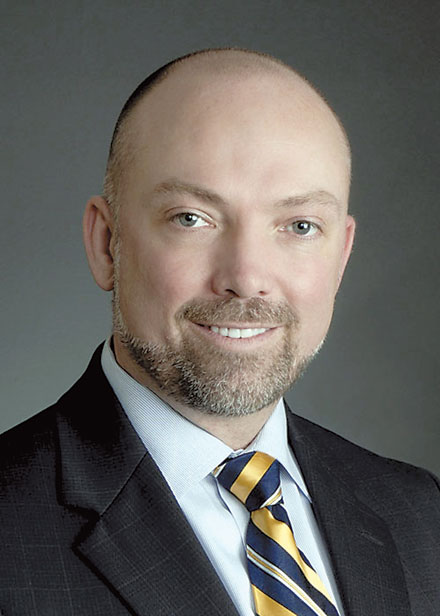 Remembering Rodney Camren, the heart of it all
By D.J. (David) Walkiewicz
President, Heart of Gwinnett

Rodney Camren wasn’t just a friend of mine; he was a friend of everyone.  Strangers didn’t exist in Rodney’s world.

One could not speak to him without being drawn to his infectious lively spirit and hopeful optimism. He could light up a room as soon as he entered; he was truly a shining light in our community.

My best memories of Rodney include his smile, his laugh, his thoughtfulness, but most importantly, his desire for everyone around him to succeed. 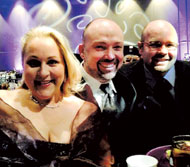 He was invested in our community for so long that he was practically synonymous with Lawrenceville. Rodney Camren was one of the original founding members of the New Lawrenceville networking group and was the driving force keeping it going for many years. Without Rodney Camren, I would not have been blessed to have met so many wonderful, hard working, endearing people that I am proud to call friends. That is a large part of the stamp that Rodney left on our community. Lifelong friendships were fostered as a result of New Lawrenceville, now known as Heart of Gwinnett.

I believe that Rodney would be proud of the legacy that he left behind.  New Lawrenceville’s tagline was, “Bringing Community Together”.  I think it is safe to say that New Lawrenceville accomplished that goal, but Rodney Camren was the difference maker. He was the reason so many people wanted to be a part of New Lawrenceville.  He was the reason so many of us wanted to be a part of something special. What started out as a simple networking group quickly turned into an avenue for which like-minded entrepreneurs and business professionals could give back to the community.

Several ways of giving back to the community were started under Rodney’s watch. For several years the New Lawrenceville Trolley Tours ran in the summer. The tours provided great historical information on the city of Lawrenceville. The tours were free for riders, thanks in part to local sponsors, but also due to the generosity of Rodney Camren.

The Spring Green Festival was created through New Lawrenceville and has continued over the past few years under Heart of Gwinnett.

The Par for the Cause golf tournament was launched due to his influence on the community as well. Rodney Camren was a champion for small business. He helped so many get their name out in the community, my business included. Rodney was a strong believer in doing good things for the sake of doing good things. Help your community, help your neighbor, help your local small businesses and eventually good things will come back to you.

Rodney left an impression on us all and I feel that we can honor his legacy by continuing to do good things in our community while continuing to grow and foster new relationships within the community.

Rodney Lee Camren, age 47 of Lawrenceville, Georgia, passed away unexpectedly on Tuesday, June 28, 2016 at his home. Rodney is survived by his loving partner of 10 years Michael A. Rumph.

Rodney was born in Coffeyville, Kansas. After graduating from Seneca High School in 1987, he enlisted in the United States Army where he became a Paratrooper in Fort Bragg, North Carolina (35th Signal Brigade). He then served in the Gulf War, with an MOS Brigade Budget and Supply S-4. Upon receiving an honorable discharge from the Army, Rodney attended Central Piedmont Community College and then Queens University of Charlotte where he received a Bachelor’s degree in Psychology. Rodney then entered the world of real estate, excelling in marketing himself, selling homes as well as teaching classes in his Keller Williams Midtown office. 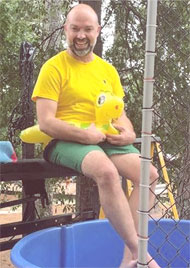 Rodney was a vibrant individual who lit up every room. He never met a stranger and always fought for the underdog. His attitude for always seeing the bright side of things was contagious, and his distinctive laugh was infectious; always bringing a smile to anyone around. He sought every opportunity do better in life, making his home, family, community and work environment better for all. He truly lived his life by the philosophy of, “I have one life to live and I will live it to the fullest, in a positive, loving and unapologetic way.”

Rodney is also survived by his parents, C.A. and Merrilyn Terry of Carthage, MO; his siblings, Melissa George of Joplin, MO; Misty Dalton and her husband Billy of Reeds, MO; Matt Terry and his wife Heather of Carl Junction, MO; Ryan Terry and his companion Nicole of Seneca, MO; as well as 6 nieces, 4 nephews, and 1 great-nephew. 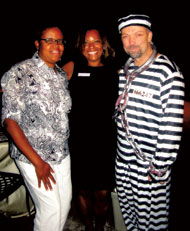 Michael and Rodney’s family would like to express their sincerest gratitude to the countless number of people who have reached out during this difficult time, sharing stories of happiness, love and laughter that Rodney brought to all of our lives.

A service celebrating and honoring Rodney’s life was held  on Saturday, July 2nd, 2016 at Wages & Sons Gwinnett Chapel. Rodney was laid to rest on July 6th in Missouri with interment and Military honors at Gallemore Cemetery.

Rodney Camrens neighbors have put a sign up in Memory based on sign to slow down that Rodney out up. 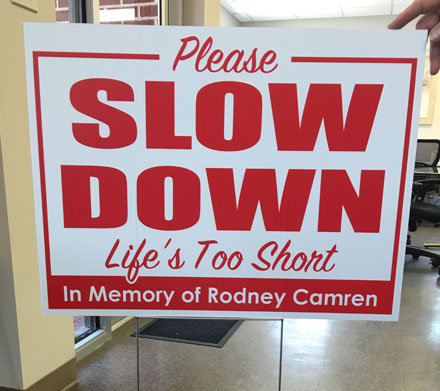