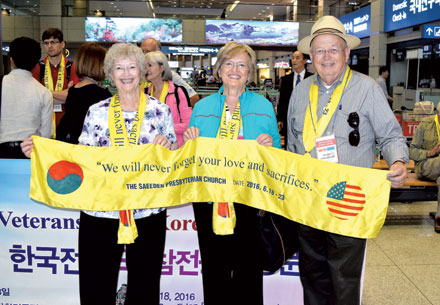 My sister, Vada Timberlake, my wife, Jeannie, and I returned in late June from a week in South Korea .  We were there at the invitation of Sae Eden Presbyterian Church in Seoul, which is the largest congregation in Korea. 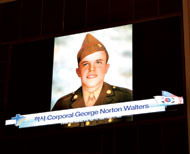 We had been invited to travel to this church of 40,000 members to help them, at their expense and for the tenth consecutive year, commemorate the lives of those killed-in-action or missing-in-action and to honor those veterans who served in the Korea War from 1950 through 1953.  The South Korean people in general, and Sae Eden in particular, will never forget those who helped save their citizens from the evils of communist China and North Korea . Today, the citizens of the Republic of Korean live in freedom.

With spouses or loved ones, there were about seventy people in our group.  Norton Walters, my brother, was KIA on August 7, 1952.  A member of Mount Zion Baptist Church in Snellville, he was 23 when he died, I was three and my sister was just over seven months old.  He was the brother we never knew, of course, but the one we have never forgotten.  And after this visit we will, for certain, always remember him and his sacrifice with much pride and admiration.

I will say the week in Korea was, without question, the most wonderful and heartfelt event ever experienced by us!!  Everyone at Sae Eden, including the pastor, Elders, staff, bus drivers, entertainers and the volunteers assigned to "watch over" us and all the others, were absolutely magnificent in every regard.  The little children singing "God Bless America" while waving Korean and American flags as we entered the church Sunday evening is something I will never, ever forget.  We could not have been more pleased and to quote my sister, "We were treated like royalty."

We attended a welcoming dinner the first night at our five-star hotel; a boat cruise with Sunday lunch culminating with dinner at the church, after which each family held a beautiful, laminated plaque with a photo of their loved one.

The remainder of the week included visits to the National Cemetery, ROK Army Special Warfare Command, Second Fleet Headquarters, Marine Corps HQ's; Seoul Olympic Park; Eighth (U. S.) Army HQ's; the DMZ at the 38 parallel; dinner ninety floors up the North Seoul Tower (just happened to be on our 47th wedding anniversary); Samsung Museum; the National War Memorial - where we found our brother's name on a bronze plaque with the other 36,000 Americans; a farewell dinner at ROK Army HQ's, followed by the most magnificent concert ever attended by my wife or me.  Each of these groups provided outstanding entertainment, meals and/or gifts for everyone on the tour.  On the day before departure, we had time for some additional sight-seeing and shopping before flying out the next day.

Yes, it was a trip of a life time, one filled with memories engraved in our minds and hearts forever from a most gracious and loving people who continue to live in freedom and treasure their liberty!