Dropping back in... after Mission Tanzania 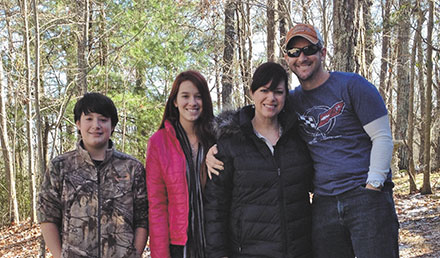 Dropping back in... after Mission Tanzania
By Beth Volpert

In 2008, when Pat and Paige Combs told their kids that the idea of taking on a mission assignment was going to be a reality, Madison and Brandon prepared to pack. The family was assigned to Dar Es Salaam on the coast of Tanzania. It was about as different from Grayson, Georgia as the family could get and would turn out to be a life-changing experience for everyone. Reentry into the lives they had left showed each member of the family exactly how they had been forever changed-for the better.

Pat and Paige’s perspective centered on how their marriage grew and strengthened; how they affected the lives of others. For their kids, Madison and Brandon, perspective came with a drastic, but interesting and fun change of scenery. Turned out, Tanzania is a pretty cool place to spend three years of your life.

Despite leaving your school, community and friends, adventure is a great alternative to traditional education. Brandon found that hunting in Africa was an experience that will stay with him for life. “It was awesome,” says Brandon (12). “I got to keep some of what we shot as trophies.” Brandon describes the wildlife and scenery as almost not real. For him, seeing Africa’s wild side was beyond anything that the movies could dream up. He has carried his skills and respect for the wild back to Georgia and continues to improve his skills in hunting. In addition to his respect for things wild, Brandon also felt that the experience gave him a stronger sense of faith. “God told our family to go on this trip,” says Brandon. “It was our job to tell people over there about the love of Jesus; I was stronger in my faith when I returned to Grayson.”

Being the older sister came with advantages when it came to making new, interesting and very international friends. “I met so many people that I am still friends with today,” says Madison (15). “Facebook and Facetime have really helped us to stay in contact so I can keep up with what they are doing.” Some of her friends remain in Tanzania; others have returned to their home countries. All of them share something that Madison’s stateside friends can’t quite imagine; life in a foreign country brings you very close to your peers. “We spent a lot of time with friends at the beach,” says Madison. “It was unbelievably beautiful there; incredibly hot, but beautiful.” Snorkeling, swimming, sunning and other beach activities were an unexpected benefit to taking a break from life in the US.

The new school experience was very different from school in Grayson for both Brandon and Madison. Class sizes averaged 30 kids total per grade. Although small, the International School they attended offered foreign language classes, art and the same basics as their Grayson schools with the exception of music education.

Missing out on music education turned out to be a real disappointment for Madison. “I love all kinds of music,” says Madison. “I couldn’t join the band in high school because I missed out on the middle school classes.” That hasn’t stopped Madison from figuring out how to achieve her musical goals. “I am working hard learning to play percussion instruments so that I can be in the band for my sophomore year.” Her determination to pack three years of music theory, sight reading and instrument mastery into one year is evident in her progress. She has surrounded herself with like-minded musician friends who are helping her along on her journey.  As if learning to play music wasn’t enough, Madison also swims five days a week plus meets for the GHS swim team, is a leader at her church, and draws and photographs with the eye of an artist. In short, Madison hasn’t let her break for adventures in Tanzania keep her from accomplishing her goals for high school.

Returning to Grayson was a bit of a culture shock. Finding anyone besides your own family and a very small handful of folks to have a conversation with in Swahili turned out to be a challenge, but being able to communicate with your parents without anyone knowing what you are talking about can be amusing. Pat and Paige have enjoyed the closeness their family developed while they were in Tanzania. “It made both of our kids mature quicker than other kids their age,” says Paige. Pat adds, “They saw things there and had safety expectations made of them that they might not otherwise have had to think about.”

It was Pat’s job to organize the safety and logistics of the local missionaries and their families. “Those concerns for other families and for our own made us communicate better with one another,” says Pat. “We were a tight-knit community and that helped us make good friends.”

While Pat worked on the daily operations of the mission, Paige found that adjusting to running a household meant that she had to think outside the box…the very small box that was their refrigerator. “I had to be creative and plan ahead to make meals and keep produce fresh,” says Paige. “It was a little challenging to learn how to shop at the local markets.”

Returning to the states was certainly a culture shock for the whole Comb’s family. Everyone remembers the first fast food restaurant they went to upon returning. “It was a Chic-Fil-A,” says Madison. Her dad described the experience as pretty surreal. “We all just stood there staring at all the choices on the menu board,” says Pat. “It was very overwhelming; we were not used to that many choices in Tanzania.”

The mission trip experience was different for each member of the Combs family. Pat and Paige found a stronger marriage. Brandon discovered a passion for hunting. Madison made close international friends and discovered her love of art and music. But for all of them, a stronger faith and an appreciation for the choices that we have here in the United States were lessons that they won’t soon forget. “It has made our kids far less materialistic than many teens here,” says Pat. Paige agrees that her kids are grateful for what they have. “It doesn’t always occur to them to want something just because it is trendy; they tend to want things that are useful,” says Paige. “That, in itself, is one of the biggest blessings that came from our mission trip.”