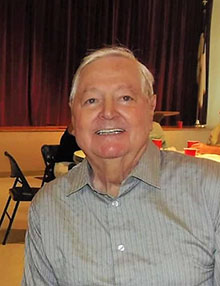 Jackson D. Snell, Sr. 83 of Greensboro, Georgia passed away peacefully, surrounded by family, at his home in Loganville on Tuesday evening, February 26, 2019. Jack was born in 1935, the fourth son of Edwin and Mable Snell of Snellville, Georgia. He married his childhood sweetheart, Barbara Bennett on November 18, 1955. He tearfully laid Barbara to rest in 2002, she was the love of his life and we rejoice at their heavenly reunion.

Jack and Barbara lived in Snellville for most of their lives and there raised three children: Jackie, Melinda, and Melodie. He was preceded in death by his parents, his sisters Helen (Tony) Todd, Carol (James) Camp, and his brothers Richard and Earle (Jean) Snell. He is survived by one brother; Ferle Snell, whom he would want you to know is the oldest Snell male to have ever survived in the US, as well as Ferle’s lovely wife Nita Faye. He is also survived by his wife’s twin sister Martha Snell (who also happens to be his brother Richard’s widow!). Jack adored his children and their spouses; Jackie (Connie) Snell, Melinda (Billy) Franklin, and Melodie (Keith) Conner. His absolute pride and joy in life though were his eight grandchildren; Tiffany (Ben) Presten, Tara (Dustin) Daniel; Mary, Amanda, and Noah Franklin; Nicholas (Stephanie), Jackson, and Gracie Conner who all affectionally called him Pops (proudly named so by Tiff). His heart was captivated and delighted by his eight great-grandchildren: Samuel, Daniel, Esther, and Emma Presten; Ellie Kate and Hudson Daniel; Piper and Hattie Conner.

As his body slowed, and he was unable to continue his outdoor sports, he found happiness in spending time with his children, grandchildren and great grandbabies. His one and only regret was not meeting in life his soon to be ninth great-granddaughter, Amelia Presten, who will be making an appearance in a couple of weeks. Lastly, he would fuss if we didn’t tell you that Noah, Piper, and Hudson all share the same birthday!

Jack is also survived by dozens of nieces, nephews, and cousins that he loved dearly. Jack was affectionally known in our large family as “the fun uncle”. He was an avid outdoorsman, taking great pleasure in hunting, fishing, horse riding, and training bird dogs. For so many in the family, he instilled a lifelong love of the outdoors by sharing his passions with them. He loved nothing more than being in the woods, camping, hunting or just sitting around the campfire telling stories. His life was overwhelmingly rich with friends and family who regularly joined him at deer camp in Monroe County, camping beside the Tallulah River in Clayton, quail hunting in South Georgia, dove shoots at his cabin or deep sea fishing in Florida. Later in life, he took great pride and joy in his house on Lake Oconee and realized his ideal refuge by building his cabin and fish ponds in Greene County. Thursday night poker games at his cabin with his friends and son Jackie, and family get-togethers with his grandchildren and great-grandchildren were his final joys in life. While many of his childhood friends preceded him in death, he is also survived by countless others who loved him dearly.

His incredibly huge heart, generous spirit, and pure joy for living left an indelible mark on this world. His circle was huge, he was a blessing to us all. He will be missed.

The Celebration of Life Service will be held on Friday, March 1, 2019, at 11:00 AM at Snellville United Methodist Church, Snellville, GA with Pastor Heath Hollingsworth officiating. Mr. Snell will lie in state at the church Friday, March 1, 2019, from 10:00 AM until the time of service. Burial will follow at Snellville Historical Cemetery, Snellville, GA. The family will receive friends on Thursday, February 28, 2019, from 2:00 PM until 4:00 PM and 6:00 PM until 8:00 PM at Tom M. Wages Funeral Services Snellville, Georgia. In lieu of flowers, memorial donations may be made to New King Church, 49 Janet Circle, Burlington, VT, 05408 in memory of Jackson D. Snell.

Condolences may be sent or viewed at www.wagesfuneralhome.com Tom M. Wages Funeral Service, LLC, “A Family Company”, Snellville Chapel 770-979-3200 has been entrusted with the arrangements.