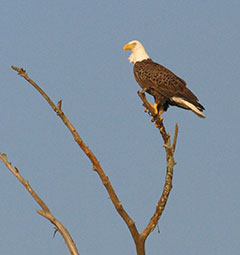 Bald eagle nesting stayed strong in Georgia this season despite a fall hurricane and heavy winter rains, according to the Georgia Department of Natural Resources’ annual survey.

Checking by helicopter in January and March, survey leader Dr. Bob Sargent counted 160 eagle nest territories in the six coastal counties and a western span of Georgia framed roughly by interstates 20 and 75 and the Alabama and Florida state lines. Add eight nests monitored by volunteers or DNR staff and the results included 168 nests and an estimated 195 young fledged. That’s about 1.2 fledglings per nest, slightly below the long-term average.

But Sargent said that considering the number of nests he usually finds in north Georgia during the every-other-year surveys of that area, it’s likely the state had more than 200 bald eagle nests for the fifth straight year. 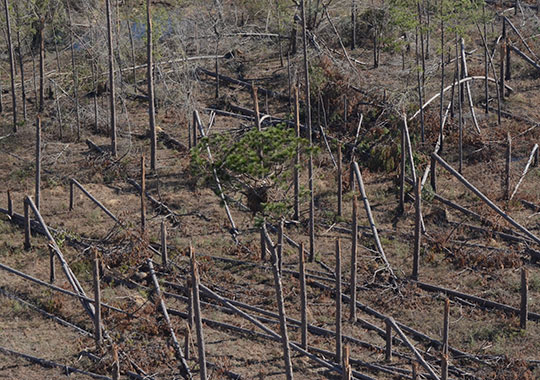 DNR surveys bald eagle nesting to monitor the status of the state and federally protected species, which is also a priority in Georgia’s State Wildlife Action Plan, a guiding strategy to conserve native animals, plants and habitats. But largely because of the eagles’ sustained recovery, in 2018 Sargent switched from flying the entire state each year to checking coastal counties annually – they have the most nests – and half of the state every other year.

The change followed three straight years of 200-plus occupied nest territories and came only 11 years after Georgia’s nest total topped 100. Almost 30 years ago, the Southeastern recovery plan for bald eagles set a goal of 20 nests for the state. DNR documented a state-record 218 in 2017, the most recent statewide survey.

Many factors have fueled the bald eagle’s recovery: a U.S. ban on DDT use in 1972, habitat improvements after enactment of the federal Clean Water and Clean Air acts, protection through the Endangered Species Act, increased public awareness, restoration of local populations through release programs, and forest regrowth.

Yet while on the rebound, eagles still face threats. Those threats vary from avian vacuolar myelinopathy, a disease primarily affecting coots and the eagles that prey on them, to being shot by people and hit by cars.

DNR’s Wildlife Conservation Section monitors eagle nesting through aerial surveys in January and again in spring. The initial flights are focused on finding active nests: those with eggs, eaglets, an adult in an incubating posture or evidence that eagles have been prepping the nest for use. The second round of surveys is aimed at determining the reproductive outcome of those nests and checking recent reports of new nests.

The public is encouraged to report eagle nests via www.georgiawildlife.com/bald-eagle, (478) 994-1438 or bob.sargent@dnr.ga.gov. One tip: Osprey nests are sometimes confused with eagles’. If unsure, check out the nesting details in the profiles for both species at.

DNR works with landowners to help protect bald eagle nests on private property. Although de-listed from the federal Endangered Species Act in 2007, eagles are protected by the Bald and Golden Eagle Protection Act, the Migratory Bird Treaty Act, and state law. In Georgia, the species is state-listed as threatened.

The Wildlife Conservation Section’s mission is to conserve eagles and other Georgia wildlife not legally fished for or hunted, as well as rare plants and natural habitats. The agency depends primarily on fundraisers, grants, and contributions to the Georgia Nongame Wildlife Conservation Fund. That makes public support critical.

Georgians can help by buying or renewing a DNR eagle or hummingbird license plate. Most of the fees are dedicated to wildlife. Upgrade to a wild tag for only $25! Learn more at www.georgiawildlife.com/licenseplates.

Visit www.georgiawildlife.com/conservation/annualreport to see how this support is put to work for wildlife.

While the 2019 bald eagle nest survey covered the six coastal counties and much of southwestern Georgia, eight nests in areas not usually checked also were reported and monitored by volunteers and DNR staff. The totals:

• Notes: Hurricane Michael destroyed 14 nest trees or nests, all in Seminole and Decatur counties. In 12 of the 14 cases, 60-70 percent of trees in the surrounding forest were leveled. Only one new nest was found in this region. Michael substantially reduced the availability of suitable nest trees, likely meaning many eagle pairs that nested in the region when it was last surveyed in 2017 did not nest there this year.
Also, during the March survey flights only two coastal nests checked had an eagle still incubating eggs. Yet in southwest Georgia adults were incubating eggs on 12 nests monitored, an unusually high percentage so late in the nesting season. Habitat damage from the hurricane combined with much higher than average rainfall October-January likely contributed to delays in mating and nesting activities. High water levels, which increase flow rates, add turbidity and disperse fish, can also reduce eagle fishing success rates, delaying the nesting cycle. A rainy nesting season can increase mortality of egg embryos (and nestlings), as well. The result: Eagles can be incubating non-viable eggs a week or more after they normally would have hatched. At seven of the 12 southwest Georgia nests where adults were still incubating eggs this March, in 2017 the eagles had been incubating eggs at the nests 40 days earlier.