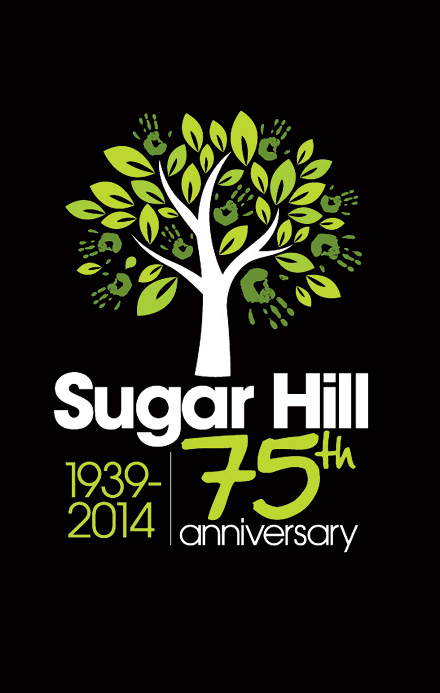 Sugar Hill, GA – The City of Sugar Hill, in conjunction with Golden Productions, proudly announces the list of music headliners to be presented at the 75th @ Sugar Hill Anniversary Celebration.

The 75th extravaganza celebrates the residents and businesses of the City. The festival is free to attend and is open to the public. The event will feature food, amusement rides, carnival, music, classic cars and motorcycles, a parade and a 5K race. The evening concludes with a ticketed community dinner and main stage concert. The 75th @ Sugar Hill celebration will be held on Saturday August 2, 2014 in the City’s downtown area on West Broad Street. The event takes place rain or shine.

This landmark event is an opportunity for the residents to celebrate 75 years of Sugar Hill. It will be the largest celebration in the City’s history. The day’s events begin with a 5K Sugar Rush sponsored by the Sugar Hill Downtown Development Authority and Coca-Cola. Next on the agenda is a parade 75 years in the making. The parade will feature music, service organizations, classic cars and more. The parade route will run north on Peachtree Industrial Blvd towards West Broad Street and past City Hall. Our carnival will include a zip line, kid’s rides and bounce houses.

It will begin at noon followed by music on the West Broad Street day stage in front of City Hall featuring Suspect B; American Idol contestant Alexa Gilomen; Bart Dorough (former band member with Sugarland); the Sugar Hill Church Band; the Broad Street Concert Band and more. The classic car and motorcycle show kicks off at noon and features everything from antique classics to modern day speedsters. The carnival, Kids World, and amusements run all day until 5pm. Stop and eat at one of the many food booths by the area’s own Proof of the Pudding. The day ends with the community dinner and headline entertainment featuring Kevin Bacon and the Bacon Brothers. Leading the Bacon Brothers off are the Haley & Alexis Band, and Andy Velo.

The headline concerts will be performed on the amphitheater stage at the Bowl @ Sugar Hill located behind City Hall. The evening concert and community dinner both will require an additional fee. The dinner will feature an affordable southern buffet (including ribs, BBQ chicken, fried shrimp, brisket, and fried lobster tail) catered by locally owned Shadow Catering and Hammerheads Seafood and Sports Grille. The dinner starts at 5:30 pm and the first headline performance will start at 7:00 pm. The event timeline, run of show, volunteer information, details on the artists, and programming, plus the link to buy your headline concert and community dinner tickets can be found at www.sugarhill75th.org So mark your calendars for a full dayand night of family fun and community fellowship. Don’t forget to check the website and buy your tickets for the evening concert and dinner - only a limited number will be made available. For more information, visit www.sugarhill75th.org or call Scott Andrews at 770-945-6716. 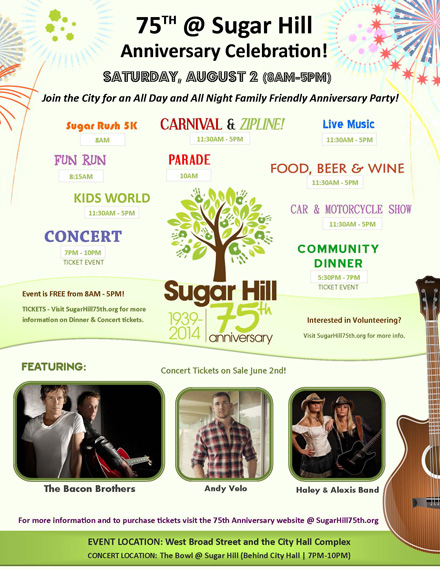 The Bacon Brothers, Michael and Kevin, grew up in Philadelphia with their four sisters in a home filled with music. By the late 1960s, Michael, already a professional musician, would gig with his band at the city's famed Electric Factory with a young Kevin tagging along when he could. It's a time preserved in the cover art for The Bacon Brothers' New Year's Day with a preteen Kevin singing alongside a mandolin-strumming Michael. The record, laden with the brothers' trademark gritty rock and a touch of Philly soul, hearkens back to those roots in the City of Brotherly Love when life was less complicated and music filled the air. Michael has gone on to become an Emmy Award winning composer for film and television; most recently scoring Good Fortune - The Story of Morgenthau, as well as a documentary about Texas Governor, Ann Richards for HBO. Kevin, a prolific stage and screen actor, is now starring in the FOX TV drama, "The Following". This will be the Bacon Brothers last tour stop and the only one in Georgia, so be sure to make it.

Local artist Andy Velo has been wowing fans for years....His road to a rising Country Music sensation has been paved by singing as if his life depended on it, for Georgia red clay raised Andy Velo, it does. Recognizing his artistʼs soul at an early age led Andy down the path of writing and performing songs that both energized and fueled him. Now, his love of music and his dreams of performing have intersected, moving him rapidly along a road of success traveled by many country stars before him. His exciting fusion of a classic country and newer country rock creates a sound all his own, a sound that is steam-rolling into the consciousness of a wide range of country music lovers.

The Atlanta based Haley & Alexis Band were a little surprised when they were nominated for the Georgia Country Music “Best (Regional) Country Band Award” of 2012, after only solidifying the current band line-up only a year earlier! The talented twin-sisters began their musical journey at a young age and started performing as an acoustic duo while attending Auburn University in their late teens/early twenties. Upon graduating, thoughts quicklyturned to collaborating with other musicians to form a more cohesive “band” outfit that would ultimately define their modern country/southern-rock sound.