The mission of the National Society Daughters of the American Revolution is to promote historic preservation, education and patriotism, according to Lynn Baxter Jacques, first vice regent of the Philadelphia Winn Chapter in Lawrenceville. 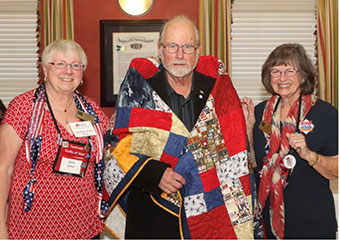 To serve the growing community as the first DAR chapter in Gwinnett County, the Philadelphia Winn Chapter was organized and chartered on April 19, 1982, with 29 organizing members.

Philadelphia Winn Maltbie may be best known for using a heavy walking stick to break every liquor bottle in a saloon on Perry Street after the owner defied her request not to sell whiskey to one of her sons. 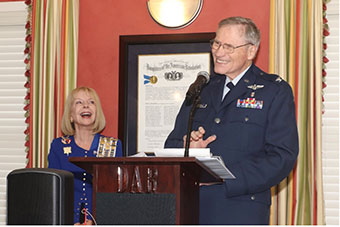 Dr. Alfred W. Studwell, (right) Colonel USAF Medical Corps (retired) spoke to the Philadelphia Winn Chapter after receiving the DAR Distinguished Citizen medal for his efforts in saving the lives of 23 Marines after the bombing of the U.S. Marine barracks in Beirut in 1983. Also shown is Philadelphia Winn Honorary Regent Ann Story.“At present, the Philadelphia Winn Chapter has 257 members,” Jacques said. “DAR membership is growing throughout our country with our one-millionth member being inducted in 2020. Although most of our chapter members reside in Gwinnett County, some live either outside of the county or outside of the State of Georgia.” She said the geographical diversity has occurred primarily by members reaching out to their friends and relatives, encouraging them to join, regardless of their location.

“Any woman is eligible for membership in the National Society of the Daughters of the American Revolution who is not less than eighteen years of age, and who is a direct biological descendant, descended from a man or woman who, with unfailing loyalty to the cause of American independence, served as a sailor, or as a soldier or civil officer in one of the several Colonies or States, or in the United colonies or States, or as a recognized patriot, or rendered material aid thereto; provided the applicant is personally acceptable to the Society.” (Bylaws, Article III, Section 1.) 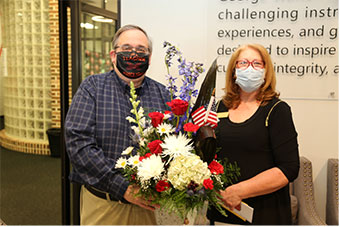 Johnny Griffin, an Eighth-Grade history teacher at George Walton Academy in Loganville, was named the Outstanding Teacher of American History by the Philadelphia Winn Chapter NSDAR. Griffin also will be recognized as the Georgia State Society NSDAR nominee.. Pictured (right) is Kathy Lobe, historian for the Philadelphia Winn Chapter NSDAR.The National Society Daughters of the American Revolution is a non-profit 501(c)(3) organization and receives no government funding. It’s a nonpolitical volunteer women’s service organization and was founded on October 11, 1890 and incorporated in 1896 by an Act of Congress.

Members volunteer in their local and state communities, as well as in national events and activities. The time spent doing volunteer work for the DAR is logged in by each member, using an online reporting form called “Service to America.” Providing detailed information on volunteer work provides confirmation of community service and non-profit status.

Its membership totals 185,000 members with 3,000 chapters in all 50 states and Washington, D.C., and includes international chapters. DAR Headquarters, located in Washington DC, is one of the world’s largest buildings of its kind owned and maintained exclusively by women.

To learn more about the steps to membership and to fill out a prospective membership form, visit the DAR website (www.dar.org).

“We are dedicated to preserving American history, promoting patriotism, and securing America’s future through better education for our children,” Jacques said. “We accomplish these principles through a wide variety of committees where most of our work is done by members.”

Through these committees, members volunteer thousands of hours annually. In 2020, 12 Philadelphia Winn Chapter members sewed a total of over 8,000 face masks, which were distributed free to a variety of individuals, including frontline workers, delivery drivers, students, teachers, bus drivers, and food service employees.

Left: Philadelphia Winn Honorary Regent Peggy Freeman spoke to students at a Gwinnett County elementary school as part of the Portable Education Program (PEP). Below: Students are taught about items used in colonial homes and at work using replicas of “artifacts.” 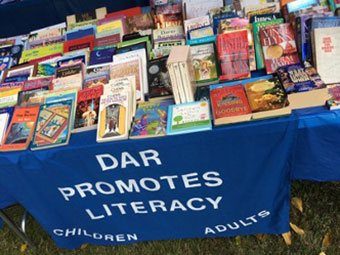 Philadelphia Winn sponsored a “free books” booth at the Elisha Winn Fair in Dacula in support of its literacy promotion mission. Books for all ages were available with no limit to the number of books taken. Over 800 gently used books were donated by members.The group supports classrooms in local communities by donating school supplies, facemasks, bottled water, and books. Members also recognize outstanding students who participate in essay contests or are recommended for DAR Good Citizens and outstanding JROTC members (both chosen at their schools and not by DAR).

A few of the activities of the Philadelphia Winn Chapter are listed below:

• Participate in national commemorative events, such as Memorial Day, Flag Day, Veterans Day, Wreaths Across America, Constitution Week, and the Anniversary of 9/11.

• Participate in state and regional commemorative events, such as Heroes of the Hornet’s Nest, The Battle of Kettle Creek, The Battle of King’s Mountain, and The First Siege of Augusta.

• Awarding the DAR bronze medal and a monetary gift to outstanding JROTC cadets that fulfill the qualities of honor, service, courage, leadership, and patriotism at Gwinnett County High Schools.

Another event includes attending the annual Elisha Winn Fair, where NSDAR gives away, at no cost to attendees, slightly used books donated by members, as part of the Literacy Promotion Committee. Members also teach classes for adults in how to read and speak English, prepare for citizenship tests, along with participation in reading sessions at local libraries and classrooms. 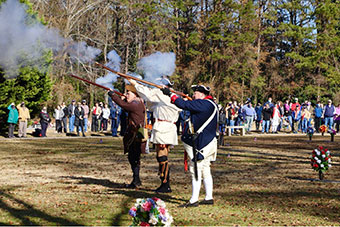 The Georgia Society Sons of the American Revolution SAR color guard and militia fire a three musket volley during the Wreaths Across America ceremony to honor fallen veteransThe Philadelphia Winn Chapter, along with the Button Gwinnett Chapter Sons of the American Revolution, assisted in organizing a new chapter of the National Society Children of the American Revolution (N.S.C.A.R.), which is named the Elisha Winn Society C.A.R. The children are working on a project called “Birthday in a Bag” by assembling party bags for underprivileged children, which will include a variety of items for a birthday party, such as cake mix, frosting in a can, candles, balloons, party favors, and plates.

“Our Chapter has been a sponsorship group for 2019 and 2020 for the annual Wreaths Across America Day, which we host at East Shadowlawn Memorial Gardens in Lawrenceville,” Jacques said “We encourage members and residents all year to sponsor a wreath for $15 each, so that we may honor all of our veterans.”

Through the Community Classroom Committee, chapter members provided an in-school field trip experience for elementary school classrooms to educate students on common items that would be found in colonial households and workplaces. Replicas of colonial artifacts were provided on tables for children to handle and identify.

American flags and other patriotic items are purchased to hand out at commemorative events; medals and monetary gifts are given to American History and DAR Good Citizen winners, as well as JROTC cadets; snacks and cases of bottled water are provided to the VA Clinics; care packages and gift cards are shipped abroad for active-military members; student scholarships are provided for higher education; historical buildings receive donations for maintenance costs, etc. There was a program that DAR inherited from the U.S. government during the Depression, the "Penny Pine Program”, that helped reforest areas damaged from floods and over-logging.

“The Philadelphia Winn Chapter plans to continue growing through new membership,” Jacques said. “Our chapter offers volunteer genealogists to assist those interested in joining, and our goal each year is to increase membership by explaining to others why they should join our organization.”

Members of the Philadelphia Winn Chapter NSDAR stand in front of the Veterans Memorial at East Shadowlawn Memorial Gardens prior to the start of their Second Annual Wreaths Across America ceremony. 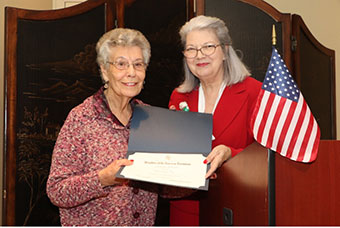 There is a fee required when the application is submitted, as well as one year of national dues. There are also dues at the state and chapter levels. For more information, contact the chapter for details at philwinndarweb@gmail.com.

The website for the Philadelphia Winn Chapter is:
https://philadelphiawinn.blogspot.com/