Lawrenceville, Ga (Sept. 3, 2014) – A four-ton chunk of the 100-mile long wall that once isolated West Berlin within East Germany for nearly three decades during the Cold War is now on display outside the Gwinnett Justice and Administration Center in Lawrenceville. Graffiti artists painted an American flag, people and buildings on the side that once faced West Berlin.

As part of its ongoing focus on safety, Gwinnett County Public Schools (GCPS) will begin a pilot at four elementary schools the week of September 2nd.

Duluth – It’s going to be a stellar production as some of the finest talent from around the nation takes the stage in a performance to surely give party-goers a good time. 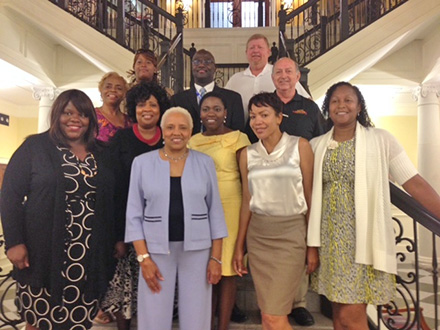 Snellville (September 1, 2014)- According to Snellville Mayor Kelly Kautz, Leadership Snellville is not an official City Program of Snellville as implied in an earlier press release (below from the Mayor's office).

Back to school jean drive 2014

Remember the excitement as a child of preparing for “Back to School” at the end of summer break? The   questions of “Who will be my teacher?  Will my friends be in my classes?   Will my BFF still be my BFF?   When can we shop for school supplies?  Not to mention, “What will I wear the first day of school?”